The Bling Ring: Dare to be Dazzled. Hate to Love Materialism. 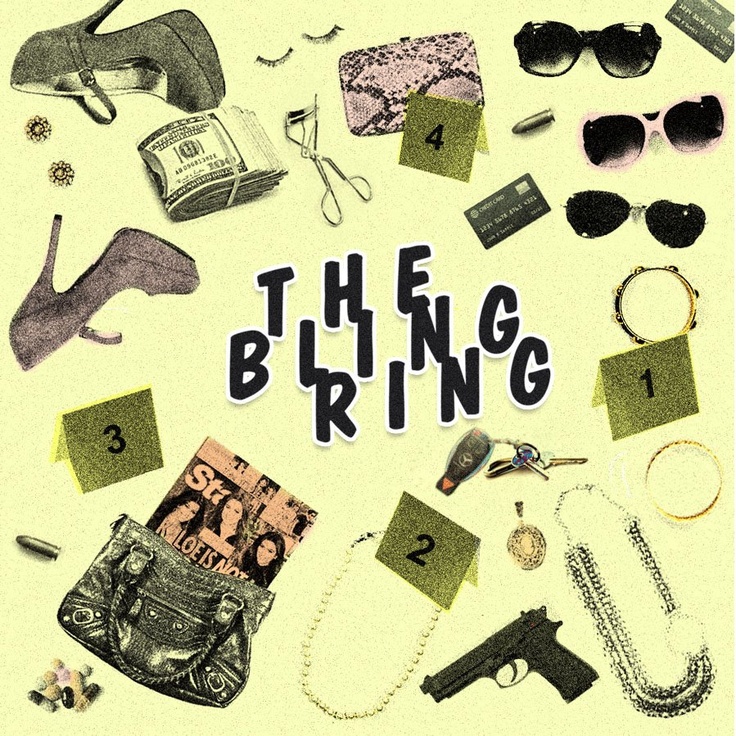 I had been waiting to see The Bling Ring since forever. The story is fascinating – it’s about the Hollywood burglaries, in which LA teenagers broke into celebrity homes and became known as ‘the Bling Ring’ – but what I really anticipated was the visual delights. The sparkly things. I mean just look at that jauntily placed title. It had to be cool. And Emma Watson as an LA teen criminal? Who wouldn’t be curious.

Shady and I saw the film in Shoreditch’s Aubin Cinema, a cosy room that seats 45, all on couches and plush arm chairs. Perfect pairing of venue to film. Afterwards we agreed – the film is eye candy. Beautiful dazzling things. Yet … it’s about robberies. Shady made a good point: the film entices its audience to desire the glamour that the criminals do, and to get the film you have to let yourself do that a little.

Materialism is presented from two angles. We have the teen burglars, but we also have celebrity victims. And the latter expands to include Society and the values it projects. The kids’ actions can be explained [though of course not justified] by a society that equates owning expensive things with success – and I think that’s the point of the film. The celebrities’ obliviousness to their missing possessions [Paris Hilton didn’t even notice until they stole over $2 million worth of her stuff] may not be entirely their faults when we consider how such public people are expected to dress and appear. Although, yes, a better security system would have been useful.

Rachel Bilson spoke out against the film, offended [and confused, it seems] by how it “glorif[ies]something that was so upsetting for a lot of people”. But I think Sofia Coppola knew what she was doing. The film is not out to condemn the criminals, but to condemn society’s outlook on materialism. When the Bling Ring flaunt their new designer pieces they found while “shopping” at celebrities’ homes, they are welcomed with popularity and glamour. They look cool [albeit trashy cool]. They clearly feel cool. And they were getting away with it. It’s not a Shame On Them film. It’s a Shame on Us film.

The film is as fascinating and alluring as celebrity gossip is, but this time I watch full on rather than out of the corner of my guilty eye. I longed to see what they would do next, to oggle at what they would find in the next celebrity shopping trip, to watch the intelligent elegant Emma Watson whine over handbags and lounge in Juicy sweatsuits. It’s all part of the nasty desire to see vulnerability and imperfection that perhaps also inspired these teens – to acquire Lindsay Lohan’s handbag was to conquer her in some sick way. It wasn’t just about owning her things, but taking them.

The Bling Ring struts, pouts, poses, and gives public statements. The ignorant articulacy of Emma Watson’s Nicki is fascinating to watch develop – how a character so detestably unintelligent can portray a confidence of its own sort. It’s a well-practiced reality TV confessional. And actually, that’s where the real Alexis Neiers [who inspired Watson’s character] ended up. She has turned the situation into a self-marketing opportunity complete with her own reality show – and she continues to get away with it.

I went to theblingring.com to find a picture for this article, and found, to equal horror and delight, that the pictures on the site list prices for clothes worn by the characters in the style of online shopping, complete with “buy it” links [hover over this button, just for fun…]. Dare to be dazzled. It’s fabulous.

Here’s what happens when one ventures into the wilderness. Luxury is redefined. Pared down. Made natural. We indulge in views like the one above, which are not just views, but our surroundings, our current wonderland. A picture, however well-captured, cannot quite do it justice. Back at home I doubt that I took that picture, when only weeks […]

Today I make a special birthday announcement. I’m writing my first book. As you know, I’ve spent a lot of time in the mountains lately, and every night I would return home to the tent to scribble down post ideas. Post ideas turned into longer ideas, and longer ideas turned into well, why not let’s […]