This essay is about following your dreams, even if you’re already living in one. I share the story of how I journeyed to Oxford, and this fall, how I discovered a new fantasy in New York. 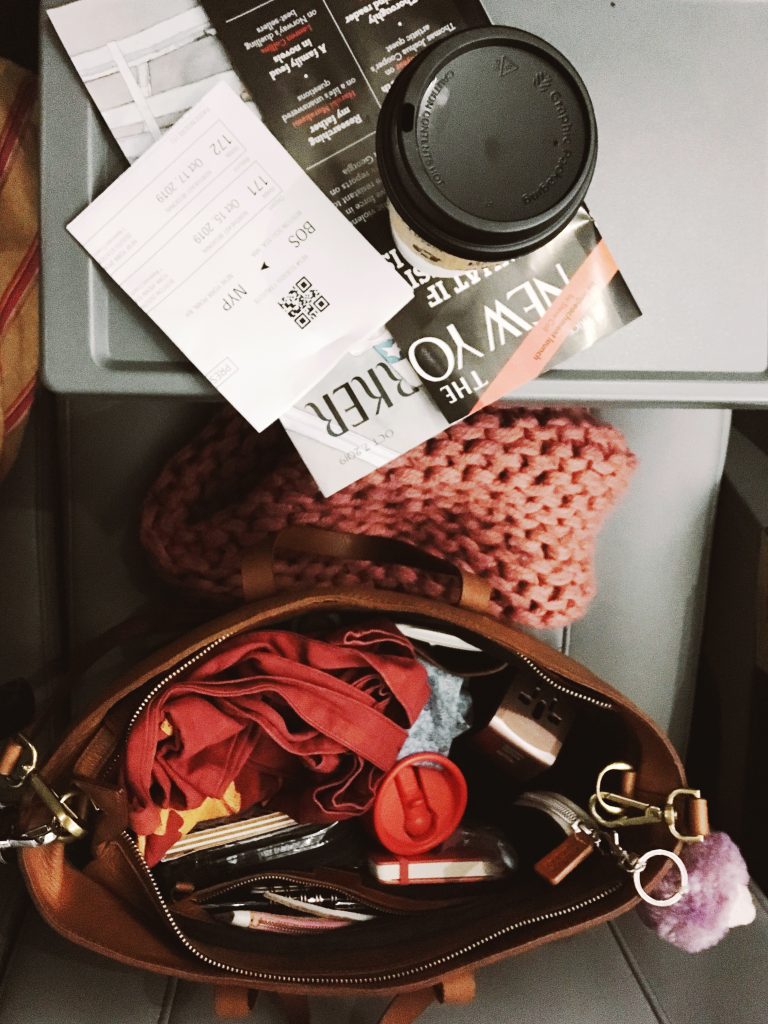 I’ve told this story before but it’s an important one.

It’s the story of how, when I was 15 years old, I set foot in Oxford for the first time, and I realised suddenly that I was in Narnia, Middle Earth, and Wonderland.

Oxford, I felt, was not a place to visit, but a place to live, and more importantly, a place to write, where so many had written before me. For centuries, people wandered these streets deep in thought, deep in dreams. It’s the appeal of Hogwarts too – not a castle to tour, but a castle to live in, where kids like me did homework.

I was drawn to these places of learning and creating, places of process. The college where Tolkien learned Old English. The river where Charles Dodgson dreamt up Alice, and became Lewis Carroll. I needed to live there, one day, in the City of Dreaming Spires, maybe as a visiting student or something.

A teacher who knew me well offered a startling shortcut: what if I applied as an undergraduate? I hadn’t let myself imagine the possibility. His suggestion gave my dream permission to grow. I tailored the rest of my teens to get there, to do an English degree at Oxford, and a few years later, I showed up with my suitcase at the gates of Exeter – aka Jordan – College.

Oxford? I could never. Now I know better. I know to entertain the fantasy even if it seems impractical. Oxford, the birthplace of so many fantasy worlds, reminds me that anything can happen, even the impossible. I’d never been anywhere like it, until this October, when I went to New York.

I’ve been to New York City, many times before, many weekends as a kid, up from Virginia or down from Boston, humming ‘NYC’ from Annie as we reached Manhattan.

Swimming like a speck among enormous posters of my favourite Broadway shows. As I got older, New York became an exciting place to visit friends who went to Columbia or NYU (just like the characters in Gossip Girl!). I still get starry-eyed when I get off the train at Penn Station, but the cityscape has become a backdrop, with the people I meet taking centre stage.

I love to gaze at the Empire State, but from afar – I don’t need to be up there, playing Chuck and Blair. I’m in town to see friends, who just happen to make this city their home. These days, my friends who moved to New York have been there for a while, just like Taylor Swift.

Track One of 1989 is about arriving in the city: ‘Welcome to New York’. Track Ten of Lover is about living there, on ‘Cornelia Street’, where Taylor rented a place (she said casually in the car).

That song came out this summer, and I knew I’d be in New York a couple months later. I considered taking a detour downtown to see Cornelia Street for myself. I flagged it on my map, in case I happened to be in the neighbourhood, but it would be silly to prioritise a street when I had so little time, and so many people to meet.

Turns out, I was in the neighbourhood after all.

One of the people I was meeting in New York was Nick. I’ve been helping him with his book over email, but we’d never met in person. ‘Have you been to Washington Square Park?’ He asked over the phone, offering to ‘host’ my visit to the park. His book is called Party Like a Professional, and he takes the role of host seriously, whether at one of his parties, or showing a tourist like me around his neighbourhood.

I’d never been to Washington Square Park, but it sounded familiar. I looked it up, and it was indeed the park that Jess Mariano ran away to, in the very episode of Gilmore girls I’d just rewatched last week with my friends from uni. We’re all in different cities, but on Fridays, we meet as honorary residents of Stars Hollow. This episode inspired me to write a poem about Jess, so it was perfect timing – I could get a photo in that park and publish it with my Jess poem.

So there I was, wandering the West Village, with Jess Mariano and Taylor Swift in mind, but the streets filled with other familiar residents.

Doesn’t Doctor Strange live here too? Didn’t Caroline Calloway just Instagram that view? Context slid into place, and I began to feel sort of at home.

When I arrived in the park, I spotted a DSLR in the hands of a fabulously dressed woman, and it turns out that she, Linda, is a photographer and poet, from Dublin.

She was excited to share that Bob Dylan performed around the corner – from this very spot! – in the early days of his career. Weeks later, I happened to watch all of The Marvelous Mrs. Maisel. I learned about the Gaslight Cafe, a location on the show, based on a real-life venue where many artists made their starts. I had a hunch that it was the Bob Dylan one that Linda mentioned, and it was. This time I learned of the historical place before its fictional depiction, but for me, it’s often the other way around. Lenny Bruce, an actual comedian, is a character in Maisel, and I knew his name from RENT.

For the first time, I understood why people dreamed of moving to New York. What made it worth the noise and expensiveness. The city itself is a live work of art, a collage of creators and what they continue to create.

And so I welcomed the panic of the big what if. What if I lived in New York? UH OH. What an inconvenient dream.

How selfish. I’ve lived in Edinburgh for five years now, longer than I’ve lived anywhere else in my life. The first time I came here was as a student theatre critic at the Fringe. I was amazed at how this place held thousands of performers who journeyed up with their shows and dreams. I longed to live here, in a place that represented possibility and creativity, the place where Harry Potter happened to have been written. I’m living in a dream come true.

New York brought to light a feeling of guilt: I should be grateful for where I am. I’m now a resident of  a place that used to feel like a faraway fantasy. I have everything I wanted five years ago, including a clear route to a British passport, and a soft dog.

It’s twisted but true: living in a fantasy becomes normal after a while.

A glimpse of Edinburgh Castle is now a symbol that I’m home. I’ve grown used to being neighbours with the Queen, in her summer residence. I dream of diners and yellow school buses, staples of my suburban American childhood that, these days, I see more often in movies. A former fantasy becomes reality, while fantasy itself travels like the wind. If I tune into my fantasy, I can ride along with its momentum.

I can be grateful for what I have and welcome the possibility of more. I dream in detail, because fantasy is intricate. One detail at a time, I can weave that wish list into my world. I can let myself see what I really want. A recurring theme of my dreams is an artist’s crew: The Inklings of Oxford, the transcendentalists of Concord, the Algonquin Round Table of Manhattan, the Stein salon in Paris, at Midnight. They’re everywhere.

My friend Erin is a former New Yorker who moved back to DC. She said the same: ‘I miss New York so much! I miss the people. But I realised that there are people like that all over the world.’

Turns out, my local artist friends have New Yorks of their own: London, Berlin… We can live in them together, far away. Erin and I can share New York from afar too.

New York City is bringing people together, but isn’t any home?

Back in Leith I bump into neighbours in the street, colleagues in coffeeshops. Where everybody knows my name, because I bothered to introduce myself. I can be the city that brings people together. I can have New York days without getting overwhelmed by a New York life. I can wear some of its artistic spirit, while wearing my Boston cap upon my head. It’s what my Washington Square Park host, Nick, is teaching after all – bringing people together in our own little parties, all over the world.

My New York City is a blend of friendship, fiction, and history as interpreted by musical theatre.

I can be an honorary New Yorker, like I’m an honorary citizen of Stars Hollow, a resident of Gryffindor house, even Cornelia Street. They are all real places, and so is every version of New York: past, present, and alternate universes in the Avengers (who, by the way, came to Edinburgh too).

P.S. I would love to hear your story too. Please write back on Patreon, Instagram, or email, and tell me where your New York is.

P.P.S. A new month in Everyday Wonderland begins next week. It’s my membership programme for finding magic where you already are, fantasies and all. Read more and enrol at http://everydaywonder.land. Will I see you there?

a poem/vignette Dear Reader, I’m not a Perfectionist. Perfect implies an endpoint. I don’t believe in perfect. I believe in the possibility of improvement. It can always be better, I will never be satisfied, I’m an exhausting kind of optimist. I tutored a fifth grader in writing. He kept bringing back his paragraph, I kept […]

a personal development poem I write down my goals and habits every day writing them is patience, tells my brain to make them stay tells my wishes: come my way. P.S. Thank you to Heroine Training patrons and members of Everyday Wonderland, who make my writing possible. A new month in Everyday Wonderland begins tomorrow, […]