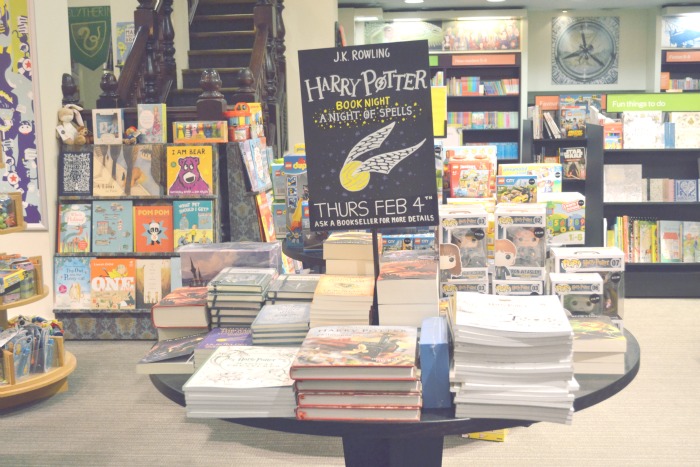 From my first [a Goblet of Fire release party I had in my room for just my sister and me, updating a WordArt countdown to midnight on Microsoft Word by hand] to the last [a massive LeakyCon parade to the first screening of Deathly Hallows Part II in Orlando], there is NOTHING LIKE A HARRY POTTER PARTY. 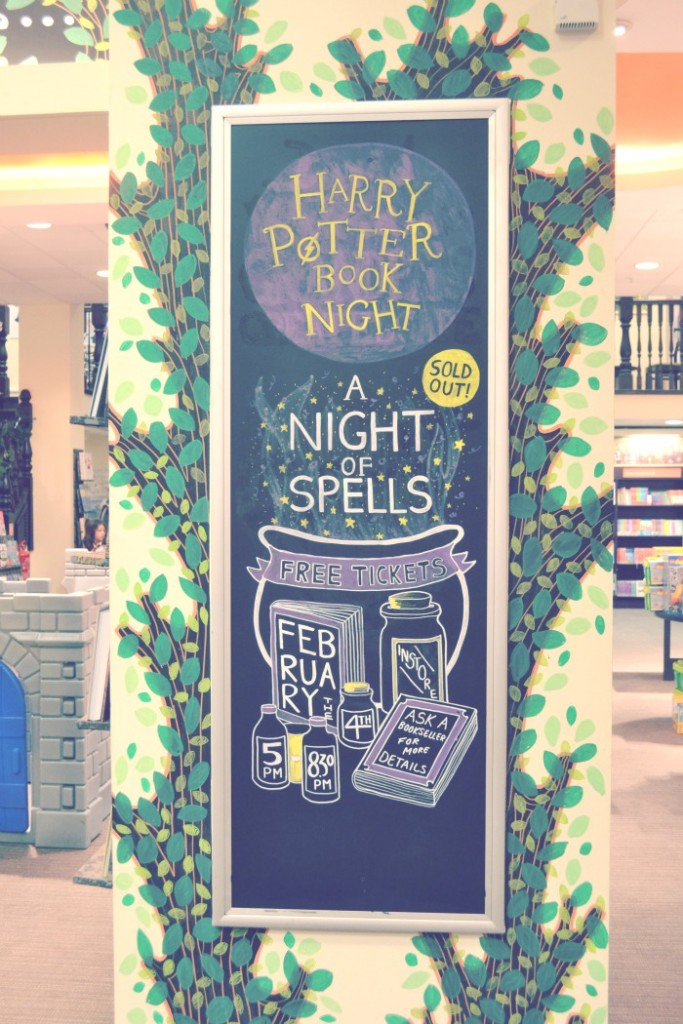 But it wasn’t my last, I am giddy to report. Bloomsbury hosted Harry Potter Book Night, with bookstores participating across the globe. Central Edinburgh held two: at the Waterstones on Princes Street and The Edinburgh Bookshop. I rallied my friend and Ravenclaw Maria to please join me in what is probably an event for children. 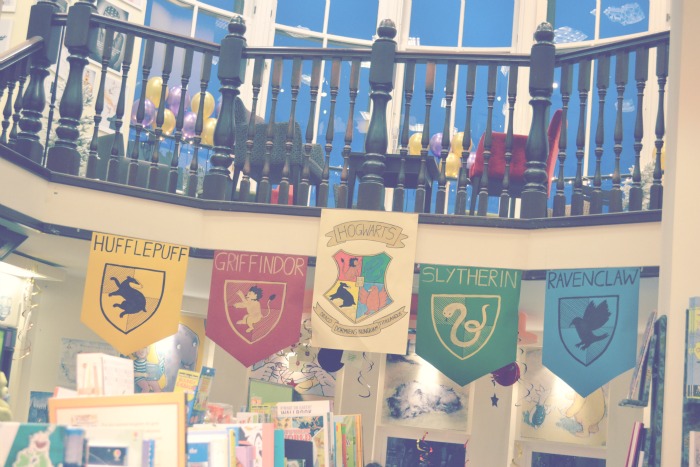 Sure enough, the queue of wizards at Waterstones’s Platform 9 3/4 appeared to be mostly Gryffindor first years [with a lone Ravenclaw, and a very small Voldemort]. Rather than feel embarrassingly “old”, I was instead rejuvenated that kids these days both care to and can experience the same joys I did as a child. 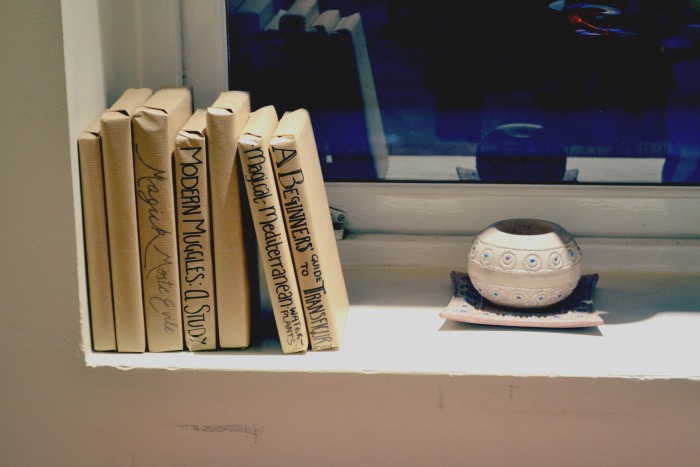 [Check out the artistic details in Waterstones’s displays (above) – they clearly have a Dean Thomas on staff! The Edinburgh Bookshop wove magical Flourish & Blotts-esque intricacies into their decor (below), and turned their already-present ladder into part of a built-in Ollivander’s.] 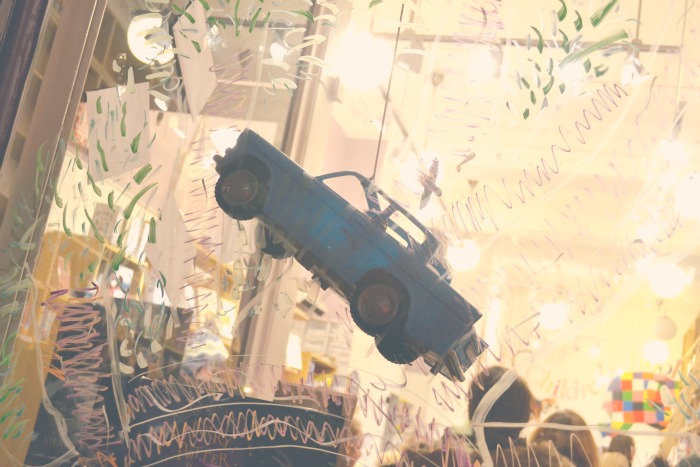 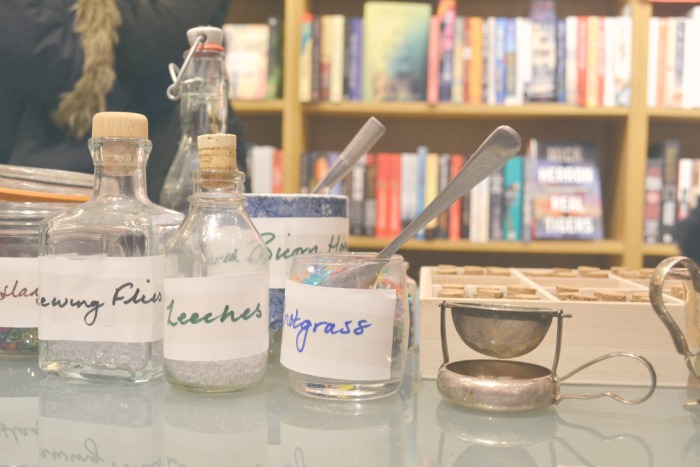 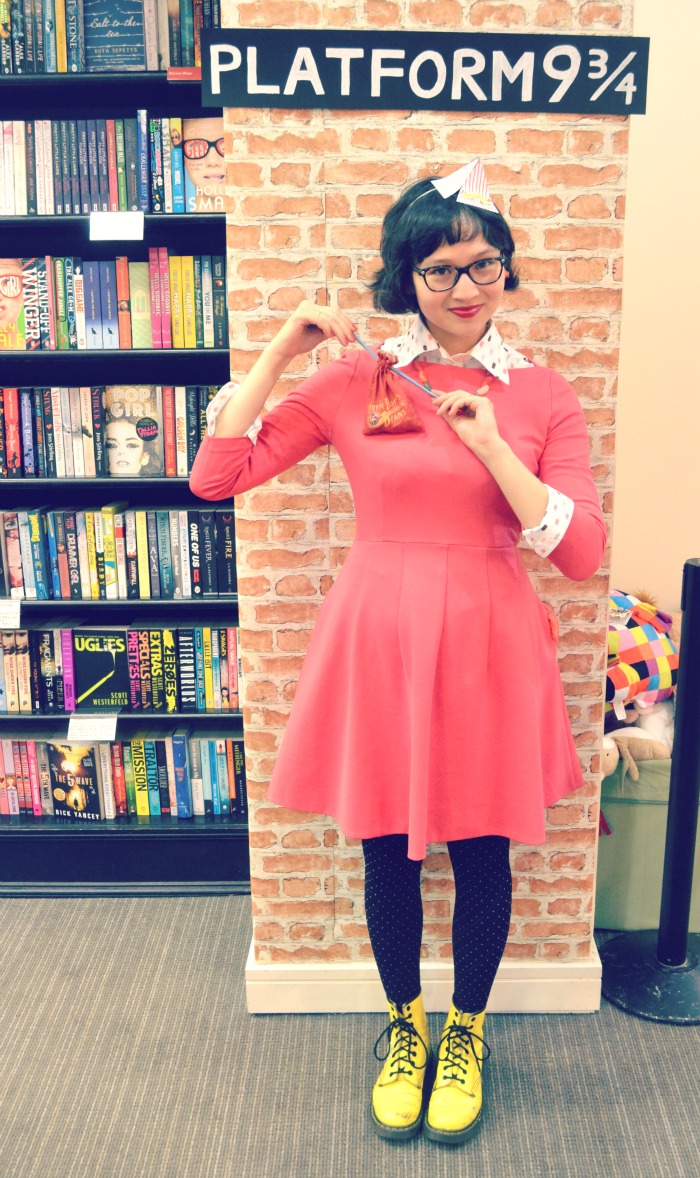 My childhood can be described in a series of Harry Potter costumes: Severus, Minerva, Hedwig, Neville, and too many Hermiones to count. My collection of wizard robes is in my Cupboard Under the Stairs in Boston, along with the Mimbulus Mimbletonia I crafted for a movie marathon. All I have with me is my Gryffindor jumper, a Deathly Hallows necklace that you might recognise from my TEDx talk, How Harry Potter Saved My Life, and obviously, my wand. I refuse to be just a generic Gryffindor student, and I couldn’t find any chocolate cauldrons for an attempted Romilda Vane costume, so I had to get creative. 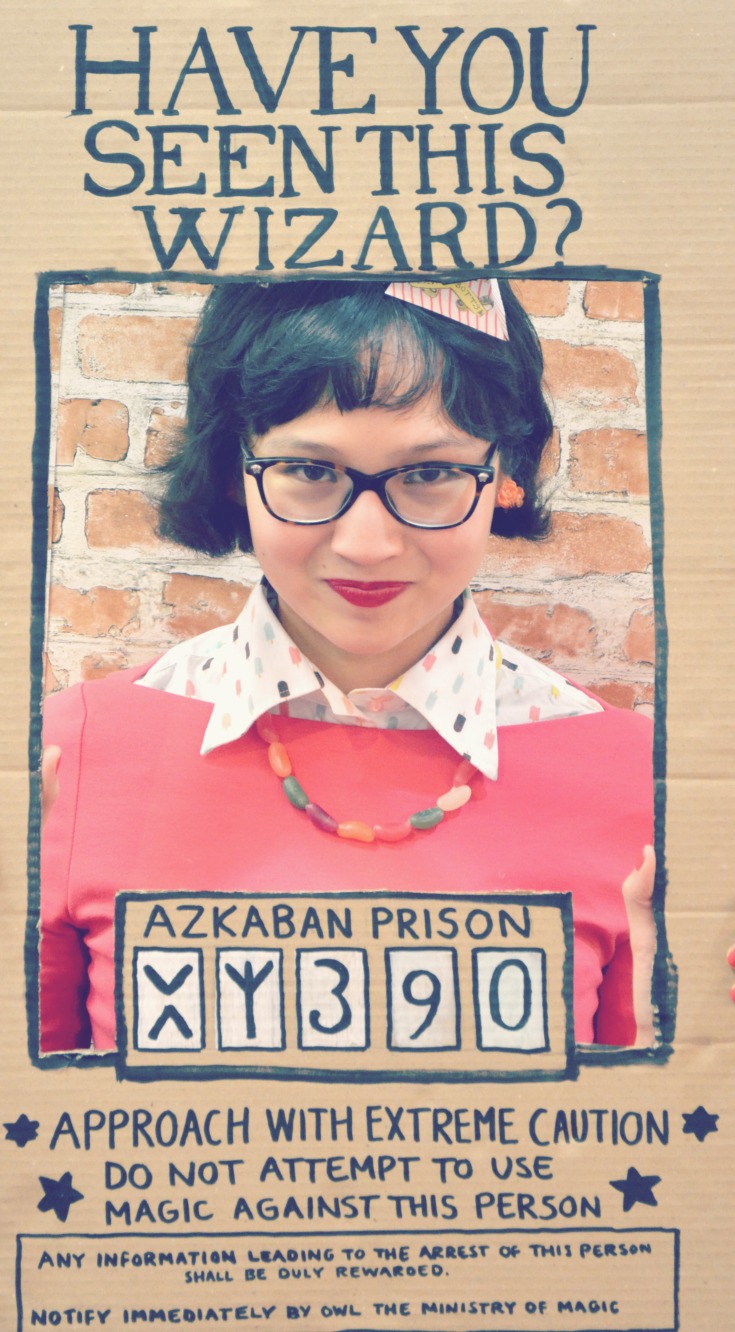 Like my Queen of Hearts costume, the idea started with what I already have in my wardrobe. My pink Kate Spade dress and dotted tights popped the idea into my head: Bertie Bott’s Every Flavour Beans. I picked up some jellybeans from the old fashioned candy shop round the corner and strung them into jewelry. 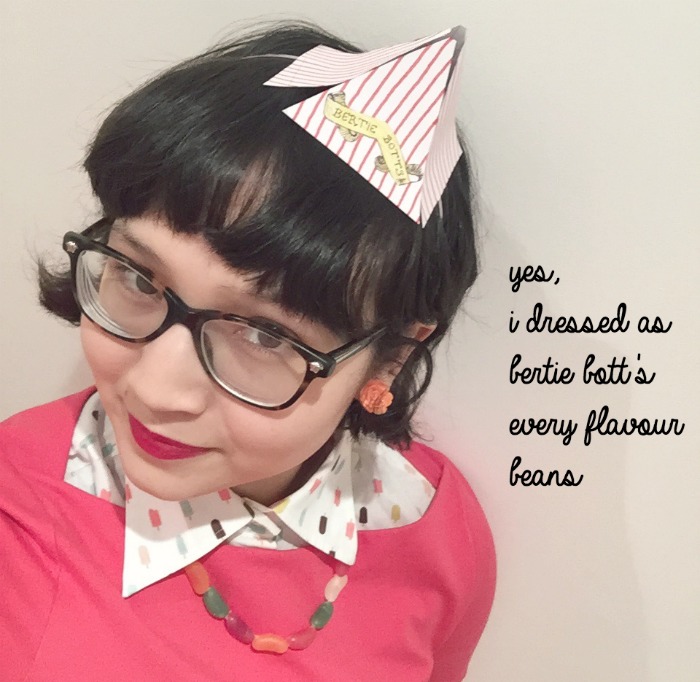 I would have never thought to layer the dress with my popsicle blouse from Paris, but limitation fosters creativity. I used the hairband from my R2D2 fascinator for a new one, made out of lined index cards that I striped red, inspired by the beautifully designed Bertie Bott’s packaging made for the films. I nearly forgot that I had my Bertie Bott’s pouch with me – I use it on a daily basis for holding my pills and vitamins. The pre-movies Harry Potter items I have hold extra charm, as they were the first images I had of the series in the muggle world. 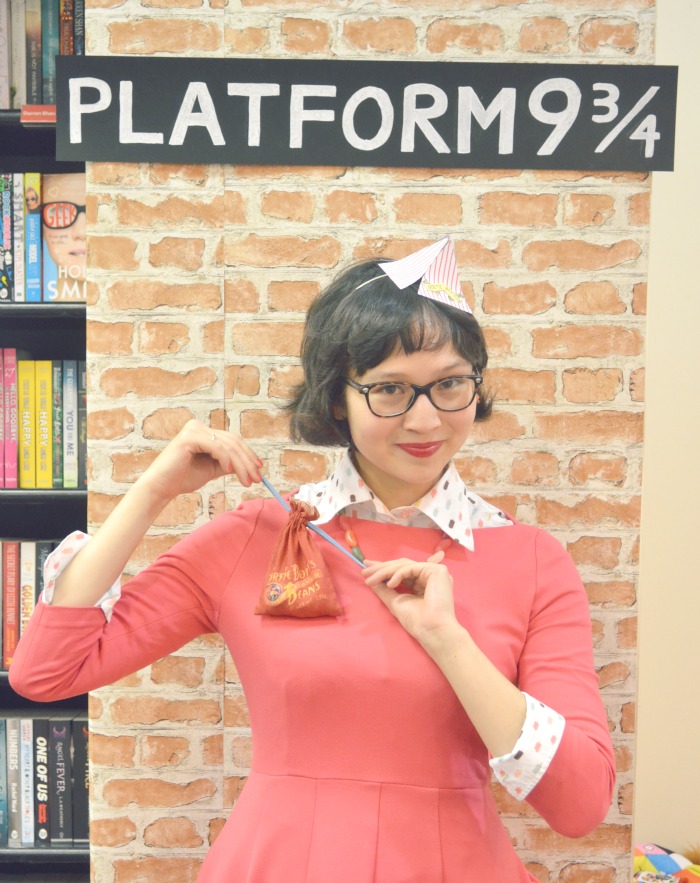 Harry Potter Book Night reminded me that Harry Potter is anything but over. Of course, I embrace this sentiment for myself and my Blogwarts students, but it delights me to encounter such spirit in person as well as behind my computer screen and my ongoing reread of The Series.

P.S. How I Infuse My (Grown-Up) Life with Harry Potter Stuff

You may have read about my year-long Jane Austen reading project, Letters from Jane Austen. [After all, I’ve been super-excited about sharing it with you at last]. At the same time, however, I was working on a second Austen project, that took up a lot of brain space because: It is time to dream-cast all of Jane […]

Let it Snow: Three Holiday Romances by Mauren Johnson, John Green, and Lauren Myracle Three stories, each featuring its own adorable couple, are woven together into one snowy Christmasy story [which, like Love Actually, can be enjoyed year round]. Funny, relatable, and reminiscent of being a teenager. Anna and the French Kiss by Stephanie Perkins Anna, […]

7 Books for Restoring Your Faith in Romance