How to Deal With Bad Teachers, According to Harry Potter 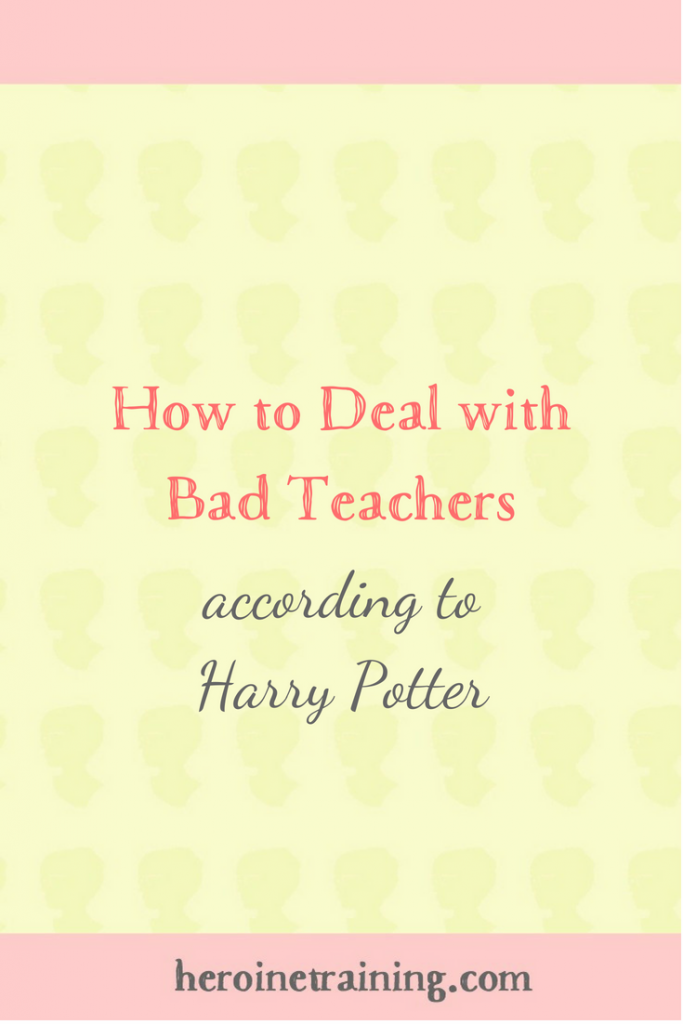 Even Hogwarts, with all its magic and wonder, cannot escape the inevitable: bad teachers.

Jo Rowling hits reality on the nose, depicting ridiculous yet believable professors and the challenges they pose to the students: and I have met at least one example of each one.

Dealing with difficult teachers can feel frustrating and unproductive, but really they are teaching you lessons beyond the knowledge you set out to learn in their classes. So shake it off, evaluate the situation, and figure out how to deal.

His Problem: “The Snape” is prejudiced, unfair, and sometimes downright mean. He has his favourites [the Slytherins] and sometimes there is nothing you can do to get on his good side. Your personalities just clash, and it feels like he hates you. The annoying thing is, he’s actually brilliant, but his sour personality and poor teaching skills overshadow his intelligence.

How to Deal: Cut him some slack because maybe there’s a reason for his grumpiness [he was in love with your mother but hated your father; or maybe he’s just hungry or has itchy hair]. Maybe deep down he has your best interests at heart [like maybe he’s secretly trying to save your life]. If you dwell on the bad and take his behaviour personally, you won’t have anything to gain. Don’t let the unfairness upset you, and get what you can from the experience. Try to learn something about the subject this person is clearly sufficient in.

His Problem: This guy is super boring. His lectures go straight over your head, and although you try to be attentive, it’s just impossible. He doesn’t interact with the class and acts like you aren’t there.

How to Deal: If you can’t get anything out of these classes, it’s okay to give up listening. Do whatever it takes to subtly, politely stay awake. Use the time for yourself as best you can, whether by tuning him out, or use him as a resource for your own interests [like Hermione asking about the Chamber of Secrets]. Find another way to learn the material, ’cause you’re not getting it from him.

His Problem: “The Lockhart” is self-absorbed, doesn’t know what he’s talking about, and is more concerned with his image than your education. He always has to have the upper hand and prove that he’s better than you: he’s the expert, you’re just a student. His classes are useless, you’re learning nothing, and you can’t believe he’s even allowed to teach.

How to Deal: Let him think you’re on his side and he’ll get off your back. Flatter him: convey your respect by asking questions to assure him that you’re learning from him. Show that you care about them [know his favourite colour]. It might just be useful to have him on your side [if you need an autograph for library permission]. Most importantly, figure out what it is about “The Lockhart” that is so displeasing, and resolve to not be that. Jo Rowling explains on Pottermore that Dumbledore let Lockhart teach because he believed that “there is plenty to be learned even from a bad teacher: what not to do, how not to be”.

His Problem: Oh Hagrid. He’s one of your best friends, but his classes just aren’t great. You love him as a person…but

he can’t teach. Most of the students think his class is a joke, and they might just have a point. You want to support him, but there’s that awkward line between being a good friend and getting the most out of your own experience.

How to Deal: Sometimes “The Hagrid” just needs your support and encouragement. He’s new to this and finds teaching – especially within constraints [such as legal threats from the Malfoys] – a huge challenge. If he earnestly asks for your feedback on how to improve, give constructive criticism, but also be careful about hurting his feelings. Maybe he sees his faults just as clearly as you, but they’re out of his control [because Umbridge]. The best you can do is to set an example for the other students: be the respectful pupil he deserves [ride that hippogriff]. Have his back, but in the end, put your educational interests first: don’t feel pressured to sign up for his class when it really matters [at NEWT level].

Her Problem: You doubt her abilities and qualifications as a teacher. She seems to be making the rules up as she goes along, and you don’t trust or respect her. Her class is subjectively graded, so she pretty much lets her favourites do well and claims that the rest are incompetent. For some arbitrary reason, she tends to single you out in front of everyone, which makes you feel quite uncomfortable. You just don’t get her.

How to Deal: There’s no right or wrong answer in this class, and that’s frustrating. Most likely she will value your enthusiasm over your hard work, so don’t waste your energy if you aren’t inspired [make up that moon chart if you must]. Play her game and she’ll suddenly like you more [maybe that does look like a Grim in your cup]. If her class is too frustrating, a complete waste of time, and you don’t need the credits, know when to leave [like Hermione, around Easter].

Her Problem: She insults your intelligence and capabilities, teaching you rudimentary information that is laughably easy. She treats you like a baby, and uses “because I said so” as explanation. Even though her subject provokes discussion, she wants you to learn it her way with her opinions. She is corrupt, fake, and reacts poorly to confrontation. No one in the class is learning anything, which is especially frustrating because her subject is crucial. Your beliefs couldn’t be more different, but she’s in the position of power so your voice can’t be heard.

How to Deal: Find someone else whose guidance you respect [McGonagall]. Sometimes there isn’t much you can do, but having a role model to turn to can help. Do the assignments that “The Umbridge” gives so that you can know thine enemy [read the whole textbook, like Hermione]. Chances are, your peers feel the same way. If you aren’t learning the material in class, get a group together and learn it on your own. Use the library, your other teachers, and each other as resources [and the Internet].

Their Problem: “The Carrows” are prejudiced like “The Snape”, and want to manipulate your opinions like “The Umbridge”. It is impossible to work with them. When you try to speak up, they use whatever power they can to assert their authority and “discipline” you, even resorting to physical torture.

How to Deal: Do not back down or give in. Stay firm in your own beliefs. But when they take things too far, retreat. Remove yourself from the situation, physically [hide in the Room of Requirement if you have to] – you do not have to deal with this on your own.

When teachers give you a hard time, think of Hogwarts. How would you advise Harry and friends to deal with certain horrible teachers? Drawing comparisons between your real-life problems and the ones your fictional friends face at wizard school can give you a new perspective on how to deal. Stand up for your beliefs, but also look after yourself.

P.S. For more wizarding lessons in wellness, download my free ebook, A Spell for Feeling Well.

Aesthetics matter Here’s a peek at the Monkey and my shower things. Inspired by Marie Kondo’s The Life-Changing Magic of Tidying, I grouped all of my shower supplies together. Instead of being dispersed around the tub, now they are lined up neatly at the edge. The new arrangement fills me with joy! Shower Stuff Made Simple […]