We Love You Lara Jean: Why My Family is So Excited for ‘To All the Boys I’ve Loved Before’ 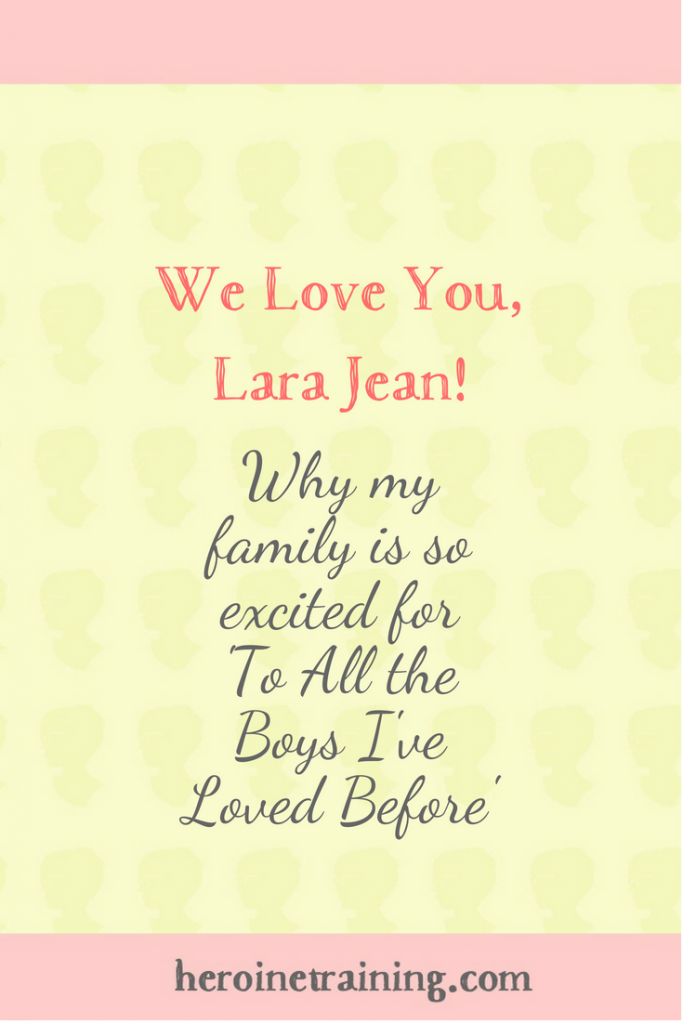 I was prepared to campaign for everyone I know to see To All the Boys I’ve Loved Before, but surprisingly, people are coming to me.

‘You should watch this movie! It’s so cute! Also, this character reminds me of you!’ and I’m like I know. I’ve known.

I’m shocked that people don’t know that I have been anticipating this for so long, that my Korean mom and my also half-Korean sister (that’s just how it works) have been counting down the days excitedly since the film adaptation was announced.

But really, I should be ecstatic that they are coming to me. I don’t have to go around advocating for this little film. It’s a big film. After nothing, suddenly, everything.

Growing up, my favourite movie was Kiki’s Delivery Service.

I felt a connection to this film that I couldn’t explain, and all my life assumed that I just liked movies about witches. It wasn’t until I was 23 years old that I realised Kiki was the only film character I ever thought looked like me. A European girl in the style of Japanese animation, she’s the closest to half-Asian I had seen.

I realised this in 2014, when Big Hero 6 was released, with two half-Asian brothers as protagonists, and I experienced this funny familiar feeling of inclusivity that I’d never experienced before.

The only Asian characters were deeply connected to their Asian identities, mostly in historical fiction. As a half-Asian woman who has never lived in Korea, who knows only a handful of Korean vocabulary, I feel like most of my ethnic identity is imposed upon me.

A lot of my experience is in how others perceive me, how I am seen as different, without really knowing why. So I assumed that girls like me just weren’t in books.

Growing up, this wasn’t something I felt sad or angry about, just a fact, that this particular part of my identity was something I didn’t talk about or write about.

Reading To All the Boys I Loved Before was the most strangely familiar experience I’ve had.

Suddenly here was this book about half-Korean sisters living in my hometown of Charlottesville, Virginia. Their caucasian dad is a doctor, and the oldest sister goes to university in the UK and lives in Scotland, where she meets a lanky English Hufflepuff. Jenny Han, are you watching me?

Here were all these details of my life, worthy of being included in this story, worthy of a film adaptation.

Here was a story about the experience of being a teenager, in which the main characters happened to be half-Korean.

In high school, I learned that I was ‘a minority’.

As a child passionate about the theatre, I didn’t know that a director told my mom I wasn’t cast as one of the Von Trapp children because ‘it wouldn’t look believable’.

As a teenager, the only roles for which I was considered in my high school’s productions were Chinese and Japanese characters.

I didn’t quite put this together until my senior year, when my school was putting on Thoroughly Modern Millie and the (white) director told me that they ‘really needed me’ to audition. Not for my abilities, I realised only as I was watching the show from the audience, but because there were two characters – originally called Oriental #1 and Oriental #2 in the film – that needed someone at least a little bit Asian.

It took me so long to understand that this prejudice was at play, let alone know how to rebel against it.

These directors meant well. But the silence surrounding the issues is what hurt me the most. I wish we could have had an open conversation about casting and race, rather than a director making the decision awkwardly and silently in a desperate attempt to be as non-racist as possible.

As a senior in high school, I was on a focus group for Actors’ Shakespeare Project (my favourite theatre company in Boston, btw). I was asked whether I would be more interested in attending a production with an Asian woman in the cast.

I had never – ever – thought about this before, but I didn’t need any time to consider it. I was surprised by the instant and automatic answer that left my lips: ‘Yes!’

Of course I care most about the quality of the production and the acting rather than the background of the actor. But when the question was asked I realised that it was never something I had seen, or expected to see. But how freaking amazing it would be to feel connected in a way I had never experienced.

I cry every time I watch the opening to the 2016 Tony Awards.

In this number, five little girls are onstage representing the five actresses nominated for Best Actress in a Musical. One of them looks like me as a kid.

‘Don’t wonder if this could be you, it absolutely could be’, James Corden sings, as the lights dim on the kids and are replaced with the nominated actors, including Phillipa Soo, an Asian-American woman who not only played a leading role on Broadway, but the role of a white American historical figure.

In the spirit of half-Korean sisterhood, I’ve asked my sister, Lara Junie*, who works in entertainment, to write about the impact of To All the Boys I’ve Loved Before and Crazy Rich Asians on the film industry, and why you need to go see them both now.

* Not quite her real name

Entertainment is a great place for the Asian Community…this week.

…and about damn time. August 15 marked the release of romcom hit, Crazy Rich Asians, and just two days later To All the Boys I’ve Loved Before launched on Netflix.

It seems like overnight there’s nothing more ‘trendy’ than being an Asian in Hollywood which is great for me as a half-Korean woman – for now.

In terms of whether this hot streak can be sustained, it’s up to the viewers to dictate whether or not they’ll show up to watch an Asian film.

Crazy Rich Asians is the first film in over 25 years featuring an all Asian cast.

While it’s a huge victory to see such an outpour of love and support for this film, it’s important to acknowledge that there’s still a long way to go for Asian representation in Hollywood.

Ironically, when I attended my screening of Crazy Rich Asians, there were 7 trailers before the film: one for Searching (an upcoming film starring John Cho, go see it on August 24 in the US), and six other trailers in which there wasn’t so much as an Asian extra in the background (not to mention a lack of Latinx representation in all 7 trailers).

The buzz generated from Crazy Rich Asians is a definitive step in the right direction, but there’s still a lot of work to be done.

To All the Boys I’ve Loved Before, distributed by Netflix, is based on the New York Times Best Selling Series written by Korean author (and my idol), Jenny Han.

Considering this is a whimsical, light-hearted, down-to-earth high school romantic comedy, this may be one of the most culturally significant films of the year.

While there is some emphasis on Korean culture (more so in the books than in the film), this story at its core is about coming of age. Lara Jean Song Covey is written as a half-Korean girl, but this is not what defines her character. She’s a spunky eleventh grader (played brilliantly by Lana Condor in the film) who deals with the same things as most high schoolers: crushes, friends, siblings, and mean girls.

This story is proof that Asian characters and storytellers can captivate the general public without needing an Asian-specific plot line to justify their belonging on screen.

I will watch Crazy Rich Asians any day of the week, all while counting down to the sequel that’s in development(!!!), but to me To All the Boys I’ve Loved Before is the unsung hero for the Asian community, and could really use as many views as possible (and there’s sequel potential here too…just sayin).

These two films have the opportunity to prove that Asian representation is something that Hollywood needs to embrace, not something that could potentially hinder a good story from becoming a blockbuster hit.

As viewers, we don’t have a lot of power to choose what scripts go into development, but we can support minority representation in films that are released to justify to the entertainment industry that diversity leads to box office hits, not flops.

From development to screen, films can take anywhere from 2-15 years to be completed, so it may be a while before the positive effects these films are spearheading.

I’m not saying that there need to be more films with a full Asian ensemble, but for an ethnicity that makes up nearly 60% of the world’s population, it’s outrageous that it took 25 years to get to where we are today.

Minorities have spent too much time being pushed to the sideline in entertainment, so when a project defies the odds and makes it through, it’s up to us to prove to the industry that people will show up.

When we see characters who look like us in movies, it affirms our identities.

Which onscreen characters have you connected with because of your background or appearance?

Seeing films with characters of different backgrounds is in an introduction to how others see the world.

How can you commit to learning about different experiences through film, and support the creation of more diverse films in the process?

P.S. One of the few words I know in Korean, but use all the time.

Last year, I started to scrap my reading list. Emma Woodhouse writes lengthy, well-meaning reading lists, and… doesn’t do much reading. Every time I added titles to my reading lists, I felt a little bit like Emma inside. One day, I deleted the endless scrolls of titles I’d kept on Evernote. I deleted my Goodreads […]

I’ve been blogging for nearly a decade. When a friend approaches me about starting a blog, I get so excited! The blogging world has changed so much over the years, and hearing about fresh interest in the medium is like finding out that kids are still into Harry Potter. I get asked for blogging advice […]

10 Blogging Tips for Beginners: How to Get Started