You Simply Must: Read Let It Snow 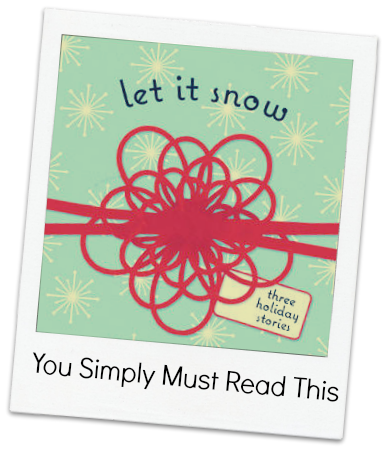 As a kid, when the Christmas boxes came upstairs from the basement, the most exciting one was the box of books: nostalgic classics like The Polar Express and Courduroy’s Christmas, as well as other random books that maybe no one else had heard of, but were special because they were there every year.

As I got older I found a new book to add to the Christmas lit pile:

Because I read anything with the words “John Green” or “Maureen Johnson” on the cover, this was an obvious choice for me. I did not realize that I would be up all night reading it in one sitting (let’s be honest – I was probably rolling around on my bed fighting heavy eyelids, but unable to put it down).

Three interweaving short stories focusing on a different set of totally lovable characters who all end up in the same Starbucks in the end.

Whether at Wyndstock or high tea, a Christmas market, or a final exam, Simple Fix: Bring a Unicorn. She will make everyone – especially you – happier. P.S. Did you know that a group of unicorns is called a “blessing”?

This is my box of gift wrap. I save tissue paper from stores, reusable gift wrap from presents I receive, and other fashionable bags. See the pink and tassel-patterned one from the Isabella Stewart Gardner Museum above! The gift wrap is contained in an IKEA storage box that lives in my desk. I keep only […]