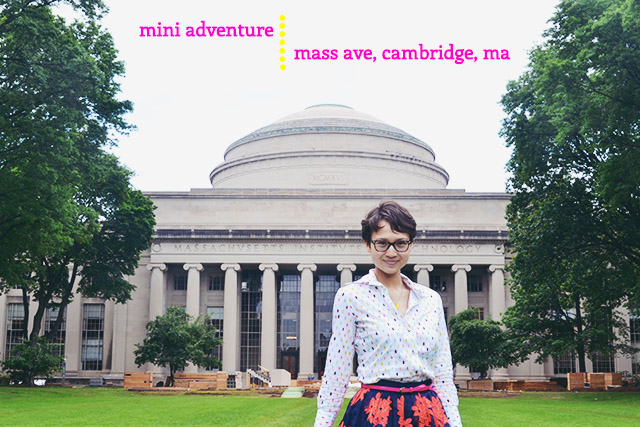 12pm I meet Peter [who runs Newton Learning Center, a tutoring program in Chinatown, where I used to work] at MIT’s Coop [co-op. It’s like a bookstore.] during his lunch hour, and he rushes me around to soak up the most photographable sites of MIT. “Your readers are going to wonder why you’re in such a nerdy place,” he says. I assure him that my readers will not be surprised that I’m doing anything nerdy.

12:30pm I take Mass Ave to Central Square, knowing I’ve vaguely headed for Harvard. I contemplate stopping for Toscanini’s, and play the chance game of Crosswalk. The little sign is an illuminated hand for “stop” (or, as they tend to chirp, “WAIT”), so I keep walking past. Instead I stop at CVS to get insoles for my shoes. Worth it.

1:15pm I spot a coffeeshop I’ve heard of but never been to: 1369 Coffee House. They have a 45-minute limit on wifi, which gives me focus.

2:35pm I resume my walk, regretting my choice to carry an umbrella over sunglasses. The forecast said rain, and yet the sun is blaring and there isn’t a drop. I stumble upon People’s Republik, a bar randomly placed in the middle of Mass Ave. It’s weird to see sites from the Wallpaper* City Guide suddenly in person and by accident.

2:50pm I pass through the Inman Square area. So that’s where that is. I should get lunner at some point.

2:55pm I spot O2 Yoga, with the attached Vegan Café. They’re giving samples, so I request one of their nachos. Oh mon dieu, the best homemade non-cheese cheese I’ve ever had. I devour a plateful and indulge in more wifi.

4pm The staff starts to congregate and I realize they are closing. Oops. Onwards on my Mass Ave journey. I see the Oberon, and other signifiers that I’m nearing Harvard Square. I am still early, so I think, how poetic! I’ll start where this journey began: another Coop. This one Harvard’s, and the interior is Hogwarts-esque with H banners. I recall being annoyed on American college tours because everyone would compare themselves to Hogwarts [Harvard included], and I was like but you’re not Hogwarts. So to be clear, I’m just talking about the banners.

4:20pm Downpour. So that’s where that forecast was coming from. Although I am indeed armed with my umbrella, I gaze out the window and wait for it to pass before facing the outdoors.

Public transportation is a wonderful thing. But on a rare beautiful day, why not walk an extra mile or two just to see what’s in between T stops?

♡ get your creative on with Mac’s awesome guide to art journaling ♡ for your minimalist spice cabinet, here’s a list of spice substitutions to keep things simple ♡ Pixie and Pixier’s down-to-earth and fabulous tips for struggling with money anxiety ♡ Garance Doré breaks down some words society uses in a way that bothers her. Words matter, people. […]

Part of being a heroine is having the soundtrack to back you up.  While I love me some Lady Gaga and Taylor Swift and Kate Nash, I often wonder about the little-known musicians that are perfect for me, that I have yet to encounter, simply because they aren’t on the radio or performing at the VMAs […]

A Playlist of Hidden Jams + Giveaway