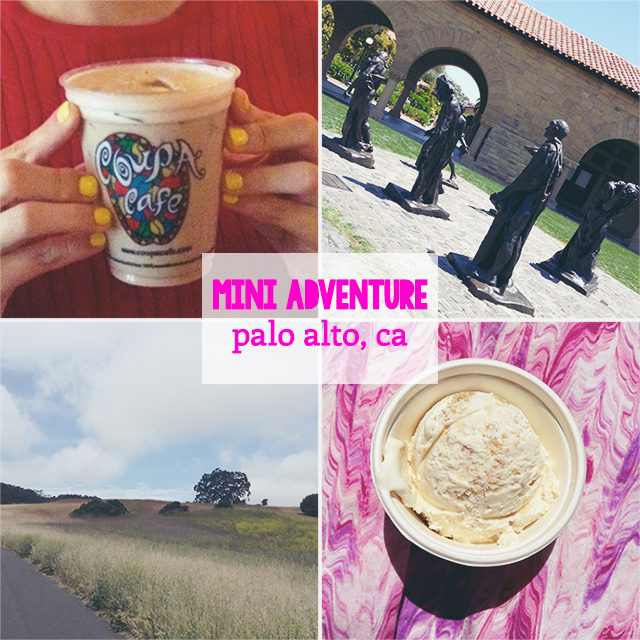 I’ve seen the Bay Area in bursts, since Sister goes to Stanford. This weekend, Mama and I flew out to surprise her with a birthday trip to Disneyland, which meant another quick stop in Palo Alto.

8:30am We got up and walked part of The Dish, Stanford’s famous steep, scenic footpath ^. When given a choice of activities, I will always go for the outdoorsy ones, especially in Nor Cal. [Recently I learned that the locals call them NorCal and SoCal.].

10am We pick up Sister for a quick breakfast at Coupa Café. They do the best iced chai ^.

12:45pm After checking out of the hotel, we walk around Memorial Church. Except the students call it MemChu. Apparently they abbreviate everything. [If my Exeter were at Stanford, would it be called ExCol?] There are also Rodin sculptures of The Burghers of Calais ^.

1:30pm For lunch we eat at The Treehouse, but first I make a stop next door at CoHo (“Coffee House”. See?) to pay homage to Yul Kwon, master Survivor strategist and Stanford grad. He’s among the celebrity grads whose caricatures decorate the wall.

2pm We pick up Sister again and drive to Town & Country, home to wonders such as Kara’s Cupcakes and Books Inc.. Today we stop at Tin Pot Creamery because it’s some of the best ice cream ^ ever. Afterwards, it’s Disney songs all the way to SFO International.

Defining the morning as a ‘mini adventure’ set the perfect balance: doing something interesting on a day that would otherwise be filler before flying off to the real adventure, but without the pressure to be too spectacular. I crossed some Stanford sites off my to-see list while visiting some old favourites along the way.

♡ What all adventurous expats have in common: my favorite Laughing Medusa post yet.  ♡ Leo Babauta, on what to do with your life: seriously, he always has the best advice. ♡ Archetypes of Disney Princesses: This whole site is interesting, but of course I love the Disney article especially. According to their [extensive] quiz, I’m 54% Creative/Tiana, 29% […]