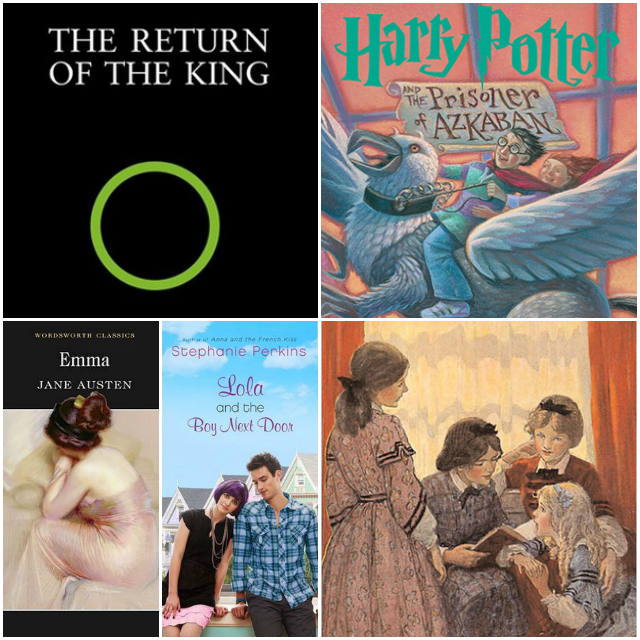 They say you’re the combination of the five people with whom you spend the most time, right? Reality aside, what about your five fictional BFFs? This article inspired by an episode of one of my favourite podcasts The Heatley Cliff, with a twist. When I heard that they were talking “fictional BFFs” I expected fictional characters rather than celebrities with whom they have fictional relationships. So here are my 5 fictional BFFs from fiction.

My 5 BFFs from Fiction

1. Lola from Stephanie Perkins’s Lola and the Boy Next Door

Lola, aspiring costume designer and fashion chameleon, becomes a different person every day through clothes. She’s super creative and super driven, but also a bit of a drama queen. We share a passion for dressing to the extreme and for the occasion. Since she’s based in San Francisco, we would wear tutus to get Kara’s Cupcakes together before baking pies at her house with her dads.

Trust me, I’ve spent quality time thinking this one through. If I were in the Harry Potter universe, honestly, my best friend would be Remus Lupin. We would be Gryffindor housemates [I would be magically his age because this is (a) theoretical and (b) Hogwarts], and I would remind Remus – quiet, studious, with a humongous heart – to be brave and he would remind me to do my homework. We would geek out in the Hogwarts library reading about magical creatures for fun.

Emma and I tend to be stubborn. For good reason, because we are both always right. Oh, is that not how the story goes? Well, we would encourage each other to be ambitious, but also find each other ridiculous – an excellent lesson in self-grounding. Two annoyingly certain ladies are better than one. We would lounge at Hatfield making lists of things we want to do. Then I would make sure that we actually do them.

Another stubborn lady, from my dear Massachusetts. Based on Louisa May Alcott herself, Jo is the tomboy of the family, and the writer. A typical day out with Jo would include working on our novels in a coffeeshop, then a speed-walk across the city to catch the latest in the Boston theatre scene, which we would discuss at length during intermission. I would also introduce her to rock climbing, which she would rather enjoy.

5. Merry from J.R.R. Tolkien’s Lord of the Rings

Meriadoc Brandybuck and I tend to take risks. The answer to Can You Do This is of course Yes. At some point down the line I often wonder what I’ve gotten myself into. Merry, despite being misperceived as a silly little hobbit, is actually quite witty and perceptive. When I read that the Rohirrim ignored Merry and made him feel small, unwanted, and lonely, I wanted to give him a hug. Not long afterwards Merry is knighted, and when he returns to the Shire he is unusually tall for a hobbit. In yo faces, Rohirrim. Merry and I would hang out in the Shire, go on adventures, and [ethically] pick vegetables.

Well this has been fun! Who are your fictional BFFs?

Occasion: Return to Oxford For a week’s worth of Oxford I wore these two outfits [only], plus my Izzy Lane pullover and All Saints coat. Hello autumn! fair trade necklace | Ambrym dress from Simonne et Lisa B | tights from Urban Outfitters | Betsey Johnson watch | Irregular Choice shoes from Schuh Godzilla t-shirt earned at Atomic […]

Whether you live in the city centre [me, Oxford, last year] or eight miles out [me, London, this year], you must allow time. Being late is annoying for the other person, and stressful for you. Just don’t do it. Figure out a strategy for arriving on time and stick to it. In Oxford, I aimed […]