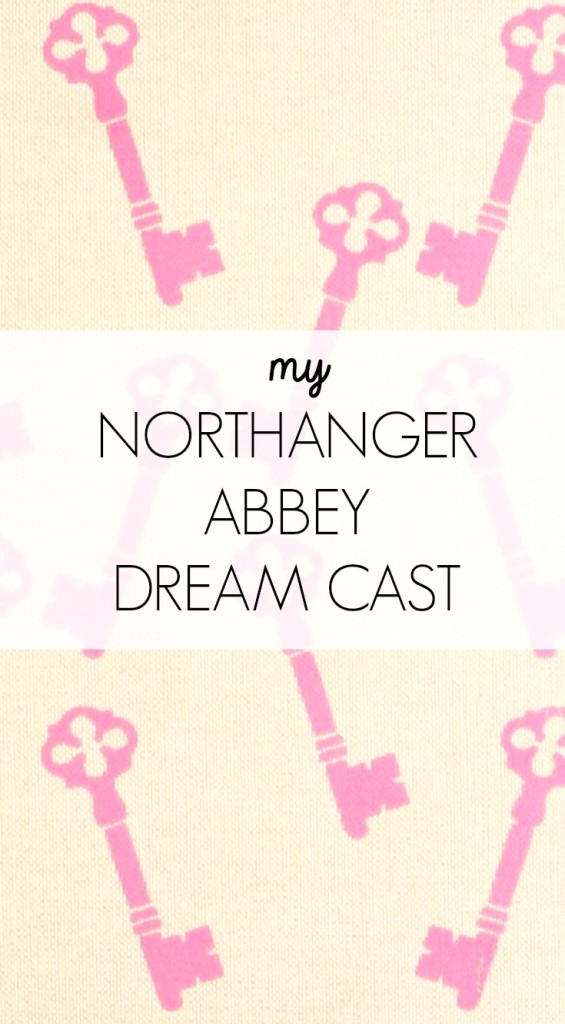 You may have read about my year-long Jane Austen reading project, Letters from Jane Austen. [After all, I’ve been super-excited about sharing it with you at last]. At the same time, however, I was working on a second Austen project, that took up a lot of brain space because:

It is time to dream-cast all of Jane Austen.

When I read, I like to visualize actors as each of the characters. It helps the characters come to life for me, especially the smaller ones. This was a particularly effective method for drawing comparisons between Regency England and our modern times, which is a lot of what my Letters from Jane Austen are about – but let’s be honest, I mostly drew up these casts for my own personal enjoyment. Here you go!

Northanger Abbey is Catherine’s journey towards becoming her own heroine (and yes, Jane Austen coined the phrase “in training for a heroine” that inspired this very website title). Who better for our sincere, curious, and slightly naïve leading lady than Zosia Mamet? I love her neurotic yet genuine character on Girls and believe that her Catherine could rival the already-great performance of Felicity Jones.

You need someone charming and playful to portray our heroine’s love interest. From Spring Awakening we know that Jonathan Groff can pull off that intellectual social rebel thing, so wouldn’t it be great to see him as a cheeky Regency fellow? Plus, Frozen is practically Sense & Sensibility anyway, so in a sense he’s already played an Austen hero.

Before she was Jessica Jones, Krysten Ritter played title character in the brilliant yet short-lived comedy series Don’t Trust the B—- in Apartment 23. This role shows that she can play the blunt drama queen bestie, which certainly translates to Catherine Morland’s best frenemy, Isabella Thorpe. Also, just cast Krysten Ritter in literally anything and I will watch it.

While looking for images for this post, I noticed that Chad Michael Murray was described as a “former teen heartthrob” which could probably apply to John Thorpe’s character as well. I could totally see him and Krysten Ritter rocking the Thorpe sibling duo, and funnily enough they were both in Gilmore Girls, seasons apart. John Thorpe is such an awful dude (he thinks novels are stupid!) that you wonder why Catherine even puts up with him. Put a likable “former teen heartthrob” in the role and it seems more understandable.

Yes, Emma Watson could play a Jane Austen heroine. Probably any of them. But I would prefer to see her in a great cameo (like in My Week With Marilyn). Wouldn’t she and Jonathan Groff be an adorably intelligent brother-sister pairing? Isabella Thorpe is a role model for Catherine, and we know too well that Emma can fill that title.

So what do you think?

If you’ve read Northanger Abbey [first of all, high five – it is my favourite Austen novel, and yet so overlooked!], do you agree with my choices?

If you haven’t read it, have I piqued your curiosity? If so, please join me for a year of book club, self-development via Jane Austen letters!

P.S. the other 5 novel casts are still to come, but if you just can’t wait, have a peek at my Pinterest boards ;)

Guys! I made a video! It’s still early enough in the year that fresh starts are on people’s minds, and my mission is to make that topic stick. Over the past year the best habit I developed was reflecting more often. In this video I discuss a new method I’m trying with Monkey. It involves […]

How to Audit Your Life

I often say that my kind of party is a tea party. But I realise that this is false. My kind of party is a Harry Potter party. Hands down. From my first [a Goblet of Fire release party I had in my room for just my sister and me, updating a WordArt countdown to […]