Why We Call Things Overrated and Why We Need to Stop 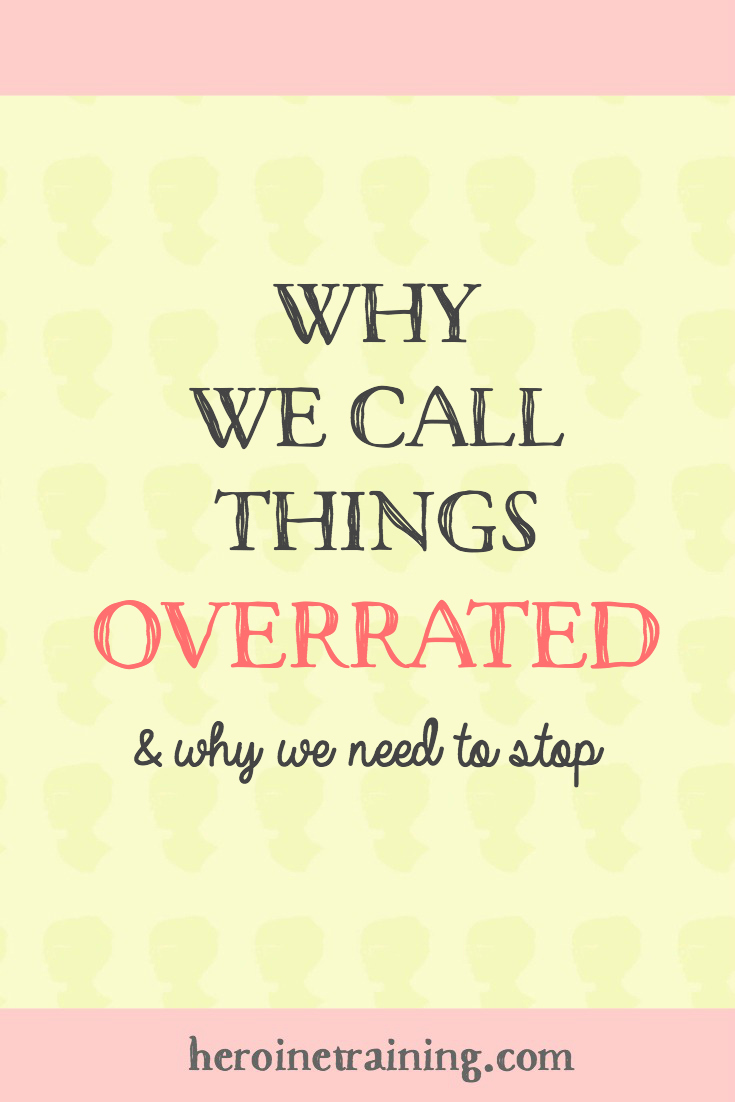 When I heard that La La Land tied All About Eve and Titanic for most Academy Award nominations for a single film, and I was like, uh oh.

Because when anything is this ostensibly successful, the dissenters start to speak up. It has reached the level of popularity that deems it, alas, overrated.

Calling something overrated feels like a bold opinion when really it’s not.

It’s a very easy non-opinion. It’s a cheap shot, and it does hurt. I know because I happen to be a fan of a lot of overrated things. So I’ve learned to deflect that personal blow by dismissing it: “Of course it’s overrated”. Anything this popular is overrated.

I’ve been on the Overrated Train too. When I was 7, I refused to read Harry Potter because I was sick of hearing about it. Just last year I was like ENOUGH WITH HAMILTON ALREADY, and I liked but didn’t love Frozen. I still feel really really badly about when a girl at camp told me she loved Avril Lavigne and I told her I hated Avril Lavigne, when in fact I hadn’t given her music a proper listen. I was just tired of everyone singing it all the time. The fatigue for fan noise gets mixed up with the thing itself, and that’s a shame, but that’s how it is.

For me, ‘overrated’ is about feeling left out.

With Harry Potter and Hamilton, I think I felt left out. Reading was my thing, and all of a sudden everyone else was reading too, but without me. Ditto musical theatre, a somewhat lonely passion of mine that all of a sudden is on everyone’s radar because of a show I don’t know very much about. As for Frozen, I think my feelings are like how many people feel about La La Land and musicals right now – I love Disney, but this is the film everyone’s going crazy about?

I try not to, but I take it all personally.

I get anxious about new Harry Potter things because I know the casuals who aren’t into it can’t wait to bring the franchise down. To rip it apart. To say that J.K. Rowling is just trying to make more money and be more famous, which sounds more absurd to me every time I hear it.

I am so sorry, La La Land. You could have been an underdog, but 2016 in film let you down and left you alone at the top for everyone to pick on. You’re still great though, and I love you.

Can we just enjoy things please?

If you’re reading this, you’re most likely a huge fan of something. Whether it’s a massively popular thing or a tiny, niche thing no one’s heard of, you love that thing. So all I’m saying, everyone, is let’s remember what it’s like to love a thing, and be nice to other people for being into their thing. We’re all fans here. It’s cool.

The problem with critics

We don’t have to compare everything all the time. I say this as the girl who puts great seriousness into ranking her top 10 films every year. I do this for fun, and I trust that your list is different from mine, and I think that is not only okay but amazing.

I say this as a critic, which is itself a misleading title, because I think the best criticism is not about what’s good and bad, but about what further conversation the art provokes: what questions does it raise, what discussions can we have? How did it make you feel and why? I LOVE THESE QUESTIONS, and find them so much more interesting and less hurtful than whether something is overrated.

So tell me about what you love, and why, and I promise I’ll not only respect that, but I’ll want to hear all about it.

After a week of phenomenal productivity, life decided that I had it too easy, and threw a cold my way. Challenge accepted. I’ve been maintaining a slightly slower version of my typical routine, with more tissues, and thanks to Filmhouse, pints of fresh orange juice. In my flood of cinematic adventures of late (Jackie, Manchester by […]

These are the stories I’ve enjoyed this month Life, Animated directed by Roger Ross Williams, based on the book by Ron Suskind This film legitimizes the power of stories and childhood make believe. Through Disney, autistic boy Owen finds his voice and understands the world, and through Disney, we understand Owen. I love his perspective on life, and […]