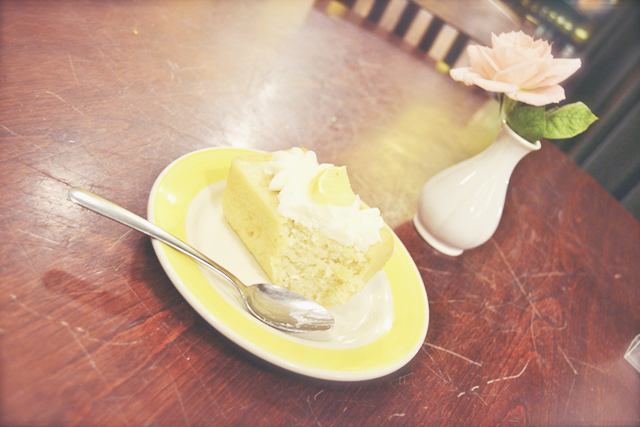 About a year ago, I went dairy-free by accident. Monkey and I were camping for a couple weeks, and dairy doesn’t keep well in summery tents, so I wasn’t eating any. Oddly, my stomach felt loads better than normal. After the trip, I got weird stomach aches, so this time I went dairy-free on purpose, and that solved it – I hadn’t even realized that there was a problem until it was solved; I just got used to feeling bloated and uncomfortable after every dairy-tastic meal. Allergies and intolerances can develop later in life, and acknowledging mine made me feel much better.

Now I eat a nearly vegan diet: I don’t eat meat, I avoid eggs for ethical reasons, but eat them when it’s more convenient to in a group; I eat some goat’s cheese (it doesn’t bother me like cow’s milk), and I eat ice cream (not enough dairy to give me a tummy ache). I’m also not super fussy about traces of eggs/milk, or if my veggie burger is cooked on the same grill as meat.

Some people have asked me for dairy-free advice, so here is my master list!

I feel most at ease when I call the restaurant beforehand to ask if they have a vegan option, or at least vegetarian non-dairy. They always do, in my experience, but occasionally you have to make a request ahead of time. Another trick is to order a combination of appetizers and/or side dishes. Side veggies are surprisingly yum!

Mexican – Most dishes have cheese, but you’re safe with customizing a tostada, taco, or burrito. They’ll look at you funny if you ask for a cheese-less quesadilla.

Asian – Generally dairy free! Over 90% of East Asians are lactose intolerant [this infographic is fascinating!].

Indian – Some dishes contain milk and yoghurt, but Indian restaurants are often 100% vegan too.

French – They do love their cheese. If you eat meat, you’ll be fine. If you’re vegetarian, go for a plate of seasonal vegetables, which they cook especially well – sometimes it’s offered as a side dish, sometimes you’ll have to request something special.

English – Vegetarians are usually safe with a veggie full English breakfast, but traditional pub fare is often meat-y or cheesy. If cheese-less nut roast is on the menu, go for it.

Pizza – Cheese-less pizza can be absolutely delicious with the right toppings (my favourite combo: pineapples and loads of veggies), but you have to ask: does no cheese mean dry and boring? Make sure there is enough tomato sauce and other stuff to make it worthwhile; sometimes I order cheese-less pizza and it comes out as basically a piece of circular bread. Ask questions.

Consult HappyCow for vegan, vegetarian, and veg-friendly restaurants and supermarkets around the world. Even if you do eat meat, vegan restaurants often mean creative dairy substitutions, so you can try dishes you usually don’t get. Some of my favourites:

What are your best dairy-free secrets?

by Diane Pauley When it comes to being your own heroine there is a rather unique mix that goes into the notion: It’s a little bit curious and somewhat adventurous, a tad creative, with a mix of wonder thrown in. So when it comes to the city that never sleeps, New York City, I recommend […]

by Xandra Burns Fiction gave me unrealistic expectations of friendships. They tend to be neatly structured in books and on tv – where are the Harry and Ron to my Hermione? The Louis and Twitty to my Tawny? If you haven’t found your fiction-worthy group of best friends, the good news is, in real life, these […]