Writing a book about minimalism has been a dream of mine since the very beginning of my minimalist journey. This story, which chronicles my time at Oxford, in the mountains, and all the way up to present day, has been brewing in my head for a while. This is the culmination of the three-year-long English adventure that for some reason I kept telling myself was too small a story to tell.

Reading over it one last time before hitting publish, I realize how personal a story it is! Here are the ups and downs of my journey that put Fashionably Light in context. Most of all, I hope that in reading my story you will discover the courage to take charge of and to share your own.

Today, I am officially an Authoress. 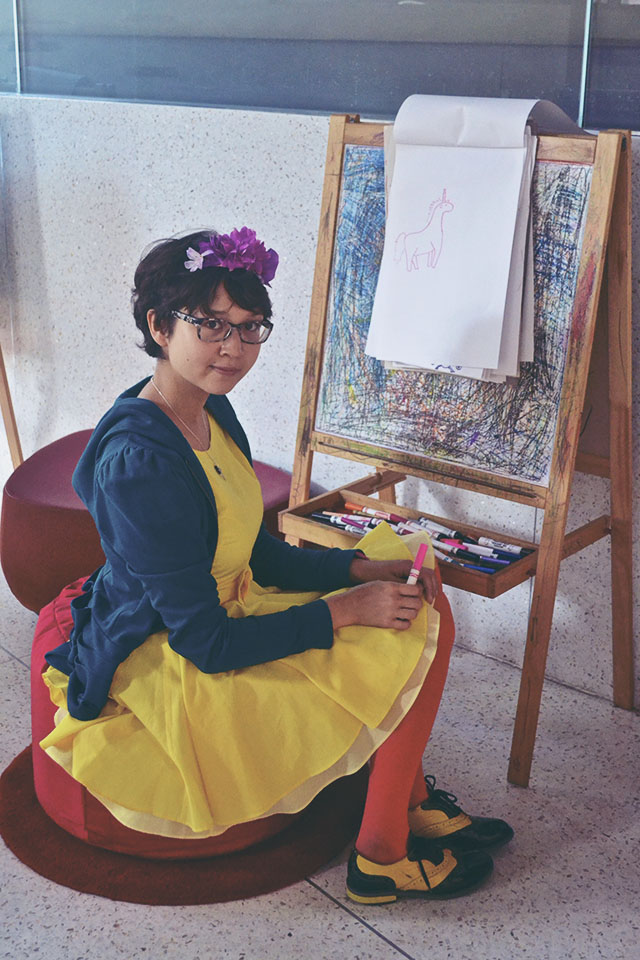 Perhaps you’ve heard that I wrote a book.

Yay! But I will be honest – it’s daunting to share, because of its genre. It’s mostly a memoir – and aren’t I a bit young to be writing a memoir?

Thinking back to when I started experimenting with minimalism, I could have used a young lady’s memoir for inspiration. That’s why I faced my doubts and wrote it, and I hope that you find it helpful.

At the end of each chapter, I include some prompts for you to ponder. Optional homework.

As for what’s inside, take a peek at the table of contents!

You can pre-order the book for $0+ here (it’s super easy), and get more info here.

Also, I hope that you will join me on Sunday for my pre-launch Google Hangout party! 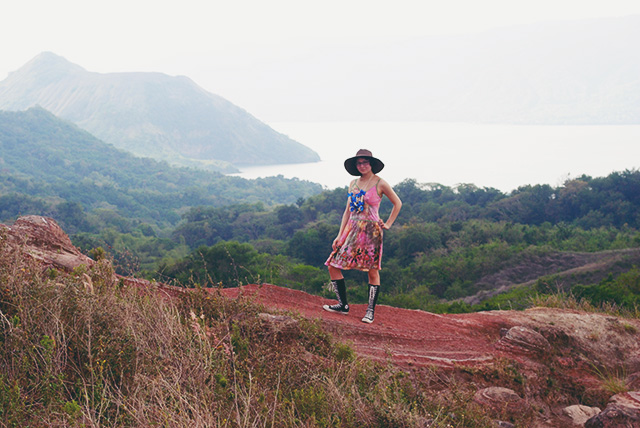 Oh my goodness. I can finally say that the book I claimed to be writing has actually been written.

The title: Fashionably Light: Becoming My Own Heroine.

This part-memoir, part-workbook tells the story of my becoming minimalist, and is filled with prompts so that you can follow along.

The video explains it all:

As for the price, it’s up to you. You can have the book for free. You can also treat me to ice cream or to the theatre. All you have to do is set the slider to wherever you feel is best.

One week after publication, I will finalize the price at the average of what my first readers set. The choice is yours.

I will be revealing tidbits over the next couple of weeks, so please post any questions you have in the comments! On Sunday 23 March, my FabulosiTEA co-host Caroline will be interviewing me on Google Hangouts – RSVP here.

Thank you for joining me in this new adventure! 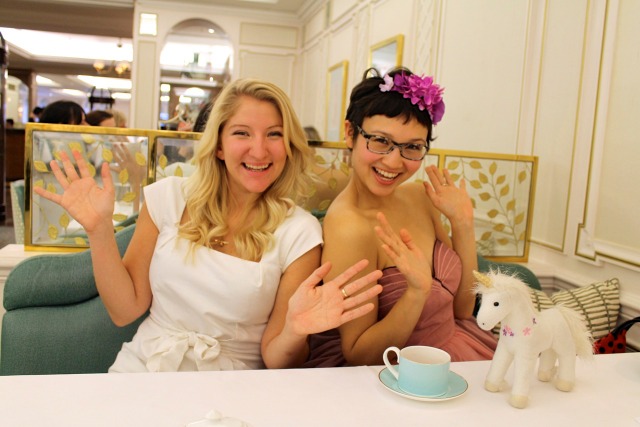 Caroline and I have been teasing you for months, and the day is finally here! We present to you, FabulosiTEA, a podcast about what you bring to the tea party – essentials for the modern heroine. [We are so. Excited.].

Episode 1: In Which we Discuss Cultivating Your Inner Bibliophile

Because the two of us are bubbling bibliophiles, here’s twenty minutes about reading books, browsing bookstores, and discovering magical worlds. 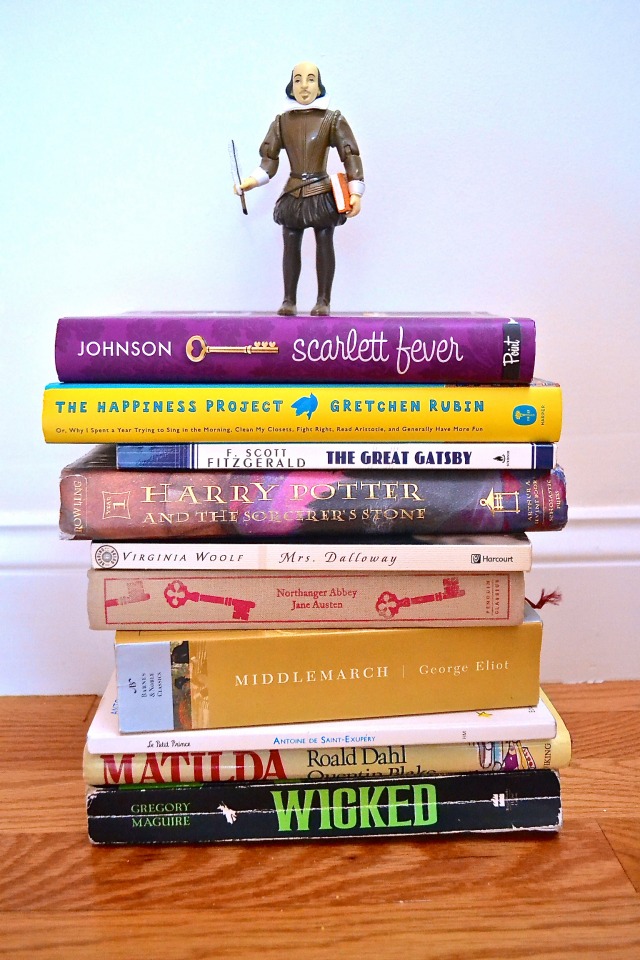 Plus… My Top 10 Favourite Books

As promised on the podcast, here’s my top ten. Man what a task.

And some book lists…

On the ‘cast, Caroline outs me as a book list nerd. I might as well own it. Here are some lists I consult as I schedule my reading year (yes, I do that too. Deal.):

But most of all, I read recommendations from friends. So…what are your favorites?

P.S. For more FabulosiTEA, and to join in on the conversation, visit our tumblr!

Here are the Very Best books, theatre, and film I consumed this year.

In each category, the list is in chronological order, with links to previous posts if relevant. Enjoy! 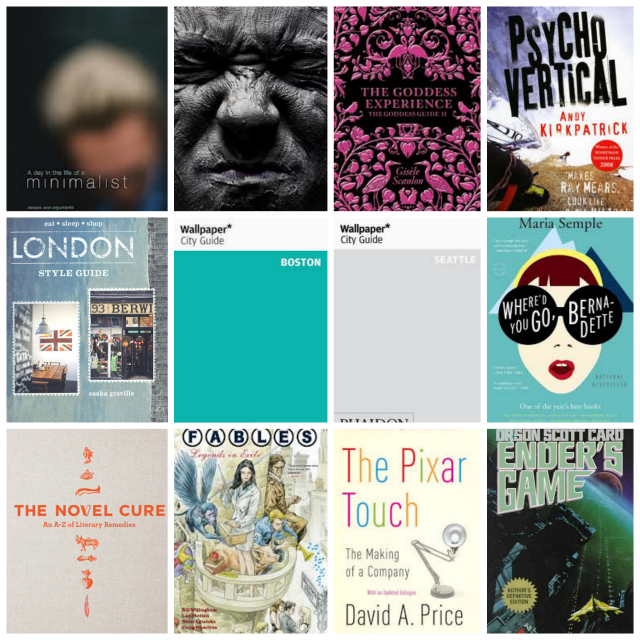 For a mindful glimpse into minimalism, read A Day in the Life of a Minimalist by Joshua Fields Milburn.

To tackle your creative fears and just do it, read The Flinch by Julien Smith [tiny and free – download here].

To find your inner goddess, travel the world, and discover new micro-pleasures to adore, read The Goddess Experience by Gisèle Scanlon.

For the courage to dare, or at least, to live vicariously through someone who does, read Psychovertical by Andy Kirkpatrick, one of the craziest and inspiring mountaineers ever, who happens to be an awesome writer.

Or, if you aren’t visiting London, get the Wallpaper* City Guide. I can vouch for the Boston and Seattle editions.

For a hilarious and heartfelt story of a clever daughter and a gone-crazy yet brilliant mother, read Where’d You Go, Bernadette by Maria Semple.

For finding something to read that is exactly suited to your place in life, read The Novel Cure by Ella Berthoud and Susan Elderkin.

For fairy tale characters with a twist, read the comic series Fables, starting with Fables: Legends in Exile by Bill Willingham.

For assurance that you should keep going with your brilliant creative ideas because everyone has to start somewhere, read The Pixar Touch by David A. Price.

For brilliant acting and an enjoyable look into recent British history, catch an encore screening of Helen Mirren as Queen Elizabeth II in The Audience.

For an exciting new play about China, America, history, politics, and especially journalism and stories, I hope Lucy Kirkwood’s Chimerica returns because it was awesome.

For a wowing, relevant, and hilarious show, watch Boston’s famous and ever-evolving Blue Man Group – the one show I would recommend to everybody. 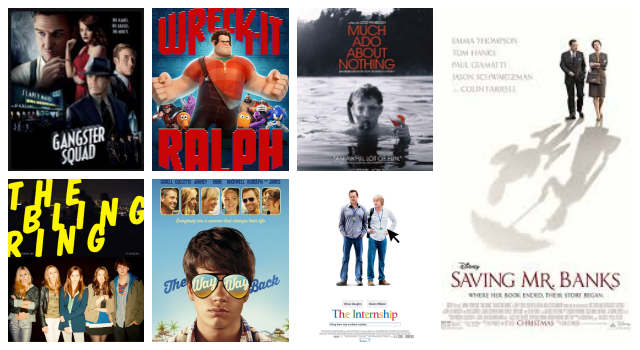 For a gorgeously exciting, and violent, break from reality, indulge in Gangster Squad.

For retro video game nostalgia combined with lovable and hilarious characters, catch one of Disney’s best, and certainly most underrated film, Wreck-It Ralph.

For the perfect balance of traditional and modern Shakespeare, set in director Joss Whedon’s own idyllic home, watch Much Ado About Nothing.

For a guilty glimpse into tainted luxury, watch The Bling Ring, and reflect on materialism and celebrity culture.

For characters that are so real and lovable that they’re more like friends than fiction, watch the hilarious The Way Way Back.

For a geek-themed underdog comedy, watch Owen Wilson and Vince Vaugn intern at Google in The Internship, what I see as the live-action version of Monsters University.

For the story behind a beloved story [Mary Poppins], watch the immensly enjoyable Saving Mr Banks, which dazzles with storybook magic and stars the more-lovable-than-ever duo, Tom Hanks and Emma Thompson.

P.S. Working on my reading and watching lists for 2014! What do you recommend?