Thoughts on My Boston and How Unicorns Help 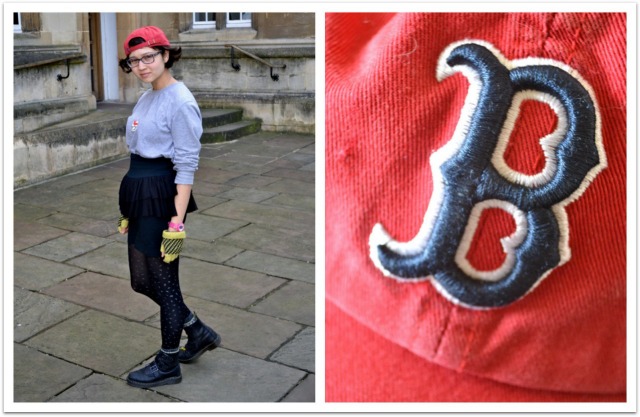 My Boston cap is one of my favourites in my already-select wardrobe. The first day I wore it in Oxford a guy stopped cycling and pulled over just because he was so excited to see a fellow Bostonian. I wore it to run in the Prague Marathon and I was wearing it on Monday on the way to climbing, unaware for a few more hours.

It has been strange, feeling so much for my city and my country from thousands of miles away. Strange as my Twitter feed, jarringly juxtaposing updates from the Boston Police with InStyle’s latest tips for bikini season. It struck me as inconsiderate at first, with the latter topic seeming rudely irrelevant in light of former. I could not help but be annoyed, until I saw this image, tweeted from Syria. Perspective placed.

What we face in Boston is devastating. But sadly and truly such devastation occurs somewhere in the world in some form every day.

So what can we do.

Consumed and overwhelmed by this week’s events, I wondered how my blog about sparkly little things fit in. How can minimalism be an important cause to fight for in wake of the bigger events happening in the world?

The thing is, minimalism is the world. It is the awareness of the details that make up the greater picture of everything out there.

Obvious but true: these events are devastating because they take or change people’s lives and we want to live and let others live freely. Patriots Day stands for this freedom, commemorating the Battle of Lexington and Concord, the beginning of the American Revolution. Attacking this day is not only cruel or inhuman. It is angering. This was our day to celebrate life and freedom. And This is our day, by the way. We aren’t giving it up.

All we can do is what we can.

I felt helpless after hearing the news. I wasn’t there, and even if I were there, I would have been useless.

I have been so inspired by the helpers.

By Boston doctors, nurses, and hospital staff rushing to work before they were called.

By how marathon race finishers continued to run to donate blood and how the Red Cross had to turn people away because they had more than enough donors.

By the signs of solidarity, from the hashtag #BostonStrong to Yankee Stadium putting rivalries aside to sing for Boston to this list of 29 reasons to love Boston to images like this one from Boston’s Facebook page that cue the Dropkick Murphys soundtrack in my head to rev up.

So what can I do, besides sign up for a long-overdue First Aid course?

I can write about minimalism and unicorns, and that’s what I’ll do now.

The unicorn is the symbol for Boston Athletics Association and for the Boston Marathon.

“Why was the Unicorn chosen as the symbol of both the Boston Athletic Association and the Boston Marathon? Chosen by the founding members of the Boston Athletic Association in 1887 — ten years prior to the inaugural Boston Marathon — the Unicorn is believed to have been chosen as the organization’s symbol due to its place in mythology. In Chinese and other mythologies, the Unicorn represents an ideal: something to pursue, but which can never be caught. In pursuit of the Unicorn, however, athletic competitors can approach excellence (but never fully achieve it). It is this pursuit to push oneself to his or her own limit and to the best of one’s ability which is at the core of athletics. And for this reason, as the marathon matured, that the B.A.A. also decided that the Unicorn would be the appropriate symbol for the marathon.”

It applies to everything we do – being a better athlete, writer, or minimalist. We constantly chase what we will never catch. As Bostonian Ralph Waldo Emerson wrote and Bostonian Steven Tyler put to song, Life is a journey, not a destination.

The little things matter because they’re what make the big things count.

We must do what we can.

We must live and truly live. Minimalism is one strategy for chasing unicorns. And unicorns are one thing to chase. Boston will never stop running. Let’s all follow.

I’ve been trying out different brands of dairy free chocolate, and the other day, when I needed My Fix, I opened the package of my first set from Zotter to find a surprise: ATTENTION do not eat but savour. Guilty! I was ready to start munching until I met this lovely reminder. The reverse gives […]