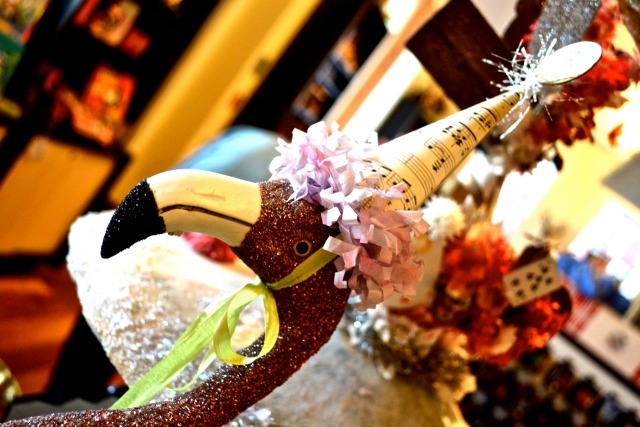 Would someone as fabulous and funky as this glittering flamingo say “um”? NO.

[Okay let’s be honest. I had no idea what image to post for this Simple Fix so you get a random flamingo. But it’s sparkly! And somewhat relevant.]

So years back, a theatre class altered my path of social confidence with one word: “UM”. Two people had to have a conversation, but one person had to say “um” before every sentence. When I was the “um” person, I felt myself shrinking my shoulders in, and questioning everything I was about to say. When I watched other “um” people I was astounded by what a difference it made – even if you say “um” with confidence, you sound unsure. It’s kinda like ending your sentences in questions? Like you’re asking someone to confirm that what you’re saying has any value?

I know it’s hard to eliminate um right away, but look out for it! Work on removing it from the beginning of your sentences first, then work on digging it out of the middle of them. When the barista asks for your name, don’t say “Um, Xandra” [because that’s my name], just “Xandra”! If that feels weird, say “My name is Xandra” to replace the “um” with some more valuable words.

P.S. Last week on Simple Fix Friday, we made breakfast.

Capitol Hill. Growing up as a Washington DC regular, I kept picturing Capitol Hill like this, when really, in this Washington, it looks like, well, that ^. Cap Hill, as the cool kids call it, apparently, is rather funky. It’s lined with quaint and cool indie shops, but is still in the heart of the downtown area, […]

I’ve grappled with this question for years. For the past three of these years, the answer has been What My Tutor Tells Me To. But now, graduated and reading list-less, I am faced with finding an actual answer. So, I asked the owner of the Albion Beatnik bookshop how he chooses what to read next. He […]

What on Earth Do I Read Next?