What to Do When You’re as Grumpy as a Horcrux 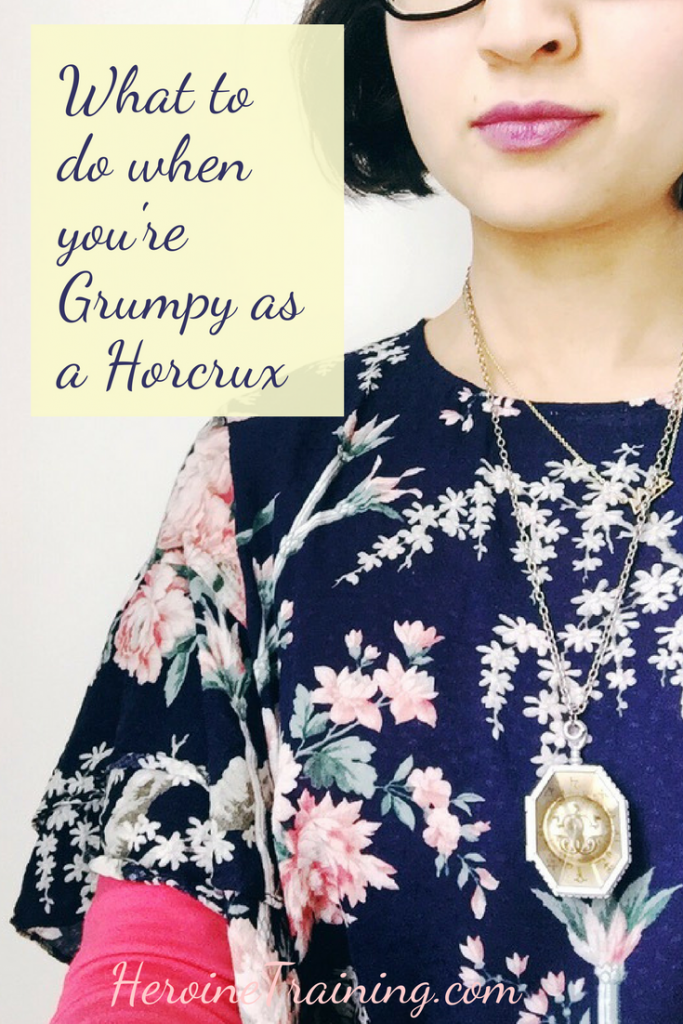 We all have our grumpy moods.

Now Gilmore girls and Guardians of the Galaxy are great, but what is Heroine Training without an extended Harry Potter metaphor?

When we get in our grumpy moods, what’s really happening is that we’re carrying a Horcrux.

A Brief Refresher on Horcruxes:

In Harry Potter and the Deathly Hallows, Harry, Ron, and Hermione are confined to a magic tent in various hideouts, on the run from the Death Eaters, under the constant pressure to hunt down Horcruxes, fragments of Voldemort’s soul contained in various objects.

What I love about this prolonged camping sequence is that the war is not all action all the time. The trio spend much of the time frustrated with one another, in close quarters with limited food and a lack of progress. They are tortured by sitting still, not knowing what’s going on. There’s nothing overtly heroic about this part of the battle.

On top of all this, they have a Horcrux necklace to babysit before they figure out how to destroy it. When one of them gets in a mood, it’s often because it’s their turn to carry the necklace: a sort of One Ring to Rule Them All situation, a burden that must be shared, or its power will overcome the bearer with ULTIMATE ANGST.

How I Came to Own a Horcrux:

We have a replica of this necklace at home.

When I was 16, I took a fantasy literature class at an Oxford summer programme (And while I was there, Deathly Hallows came out).

When I was 21, I worked on the same programme as an assistant, and to my delight, the kids were still into Harry Potter. So of course I had to start a Dumbledore’s Army so we could geek out together.

I wrote them a pub quiz, and purchased the Horcrux necklace as a prize. They thought it best to share the burden amongst them. Obviously. They are so wise.

At the end of the programme they gave the Horcrux to me. I took it home, and decided to continue their tradition.

Admitting It: You’re Carrying a Horcrux.

These days the Horcrux is stored safely in our flat, to be picked up and worn by Steve or me when we’re feeling particularly stressy. Or, if one of us is acting stressy, the other has every right to go get the necklace and offer it as an explanation.

Yesterday for instance, Steve was grumbling at his computer, so I got up and put the necklace on the table next to him. “Yeah, alright,” he said, putting it on and continuing to type away.

Being in the physical presence of a Horcrux is emotionally and physically taxing. Generally feeling grumpy and angsty is also taxing.

The Horcrux is a simple way to ask for extra support, and to warn others of grumpiness.

Wearing the Horcrux is a reminder that this mood is not who we are.

When I wear the Horcrux, I feel validated in my upset-ness. I am reminded that feeling unwell is not normal for me. It is the burden that I bear for now, not forever.

When I visited the Orchard House, I learned that Louisa May Alcott’s family had a Horcrux necklace of their own in the form of a ‘Mood Pillow’. This ’sausage pillow’ sat upright, but would be turned on its side when Louisa was in one of her Jo March-like ‘moods’.

A pillow, a necklace, an emoji in a text – these are all simple ways to check in with those around you when you’re too grumpy to form the words. What will your Horcrux be?

P.S. The kids from the Literature and the Fantastic class all had Lord of the Rings names. Their teacher was Gandalf, and on the day I subbed for her, they deemed me Strider (definitely in my top 5 coolest achievements). They heard that Steve was coming to visit, and so he became Arwen.

P.P.S. If you’re feeling like your role in the revolution right now is like an angsty camping sequence, let’s explore that together at the Rebel Heroine Retreat.

Why I haven’t filmed a Home Tour We’ve lived in our ‘new’ flat for over a year now, and it still feels like a design work in progress. I meant to do a home tour ‘when it’s finished’ but I’m starting to wonder whether it will ever be! And actually, it’s probably more interesting to […]

In November 2016, the most I publicly did about politics was retweet Lady Gaga’s voting outfit. In fairness, it was a pretty fabulous voting outfit. The election made me realise that retweeting is not enough to support any cause.  I wasn’t sure what else I could do. I had a vague idea. I knew I […]