Words Not in English: French for a Cuddly Friend 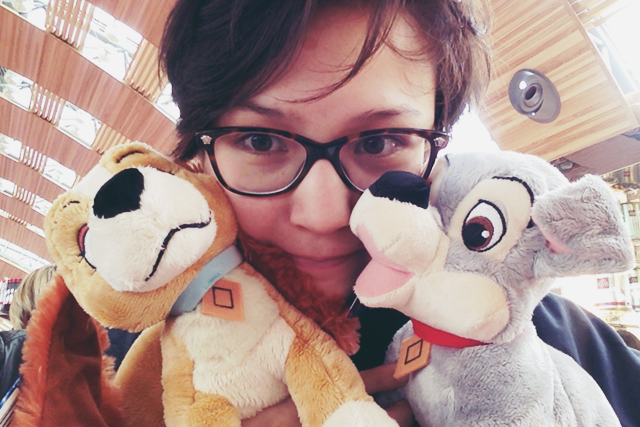 Perhaps you know that I am a passionate advocate for cuddly friends. On a particularly stressful day in high school, a friend gave me a stuffed penguin, and carrying my new friend around made me feel just as fuzzy as the companion in my hug. So I kept it up.

When I go away for the weekend, I tend to bring Bunny, but this time in Paris, I did not. Arriving at my first host’s chic flat, I noticed a new addition to her pillow: a small bear with a Burberry bow around its neck. She then expounded upon the many benefits of such a companion, making me regret my decision to leave my Friends behind.

Later, walking down Parisian streets with my second host, we cooed over a small child in a stroller, clutching a soft toy. And then I learned a new word.

Since moving to the UK, where “stuffed animal” connotes taxidermy, I have struggled to find a term for my favourite toys – they’re not toys, they’re animals, beings… – so “cuddly friend” has been the closest I have found. Monkey and I refer to my collection as The Friends.

A “doudou” is more than just a child’s cuddly toy – it represents a special, close bond between a child and a cherished object. Like a “security blanket”, but in the form of a toy, a mother’s scarf, or, as my sister dubbed her favourite pacifier, her “passy”. Something that receives many, many hugs.

As the weekend went by, I felt the absence of my own doudous, so when my flight was delayed at Charles de Gaulle, fate rewarded me: purchasing a snack, I found Lady and the Tramp. I had been considering adopting such Friends during my last visit to Disneyland, but none of their recreations were quite right. These, however, were perfect. And made me instantly happy.

Now, may I meet your doudous, s’il vous plaît?

P.S. Why you should bring a cuddly friend to tea

Shoulders aching from carrying around your handbag all day? What’s in it, anyway? In this video I suggest two simple tips for decluttering your handbag – and keeping it that way! Try out one (or both!) of these techniques and share your results. Also add your insight in the comments! What is your best handbag-handling […]

in a book // Z: A Novel of Zelda Fitzgerald enchanted, devastated, and inspired me.   on a blog // Katey and Jane’s Edinburgh Etiquette has been my primer on getting acquainted with this city, season by season!   in a song // If you’re ever in a music rut, send a simple plea on Facebook. The responses rolled in […]