Your Wizard Activist Archetype: Which Harry Potter Activist are you? 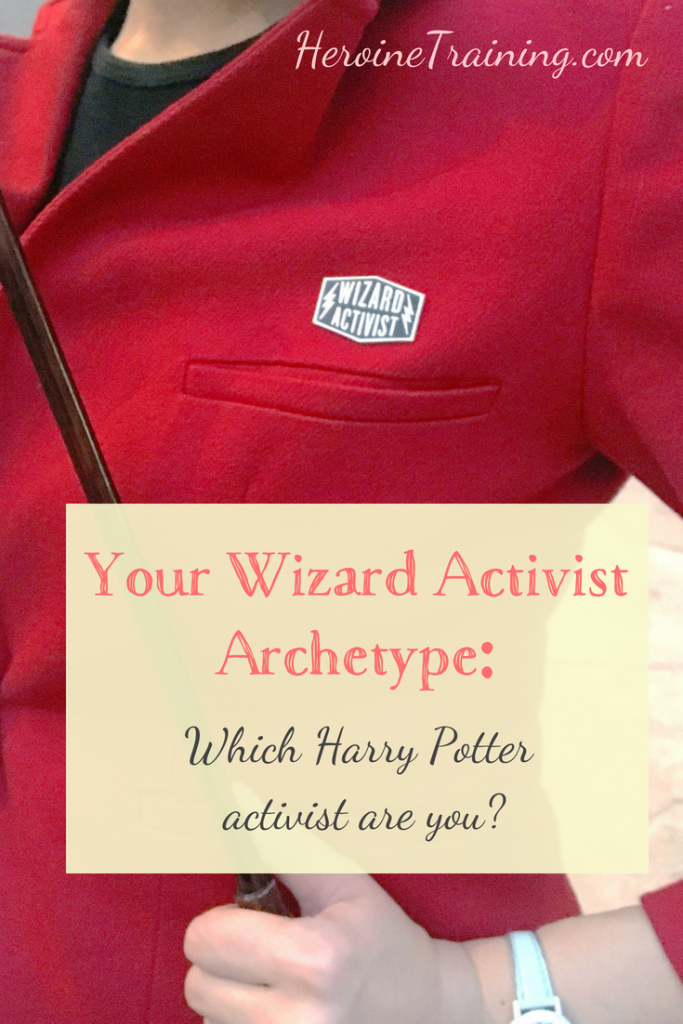 I’m a bit of a quiz-taking obsessive.

I will begrudgingly take every Buzzfeed quiz about Pixar, Marvel, and Gilmore girls, then debate with the screen over my results.

I do believe this is relevant to one’s heroine training. Seeing myself in different characters helps me to understand different aspects of my personality.

In preparation for our Rebel Heroine Retreat in Edinburgh, Kayla and I put our Potter-ful, Gryffindor heads together to create our own quiz, which explores 10 wizard activist archetypes based on characters in the Harry Potter series.

At our retreat, I am presenting on Finding Your Role in the Revolution, and using your personal strengths and tendencies as an activist to make change most effectively.

In writing these archetype profiles with Kayla, a common theme kept coming up: while it’s important to know yourself, it is also important to know what other kinds of personalities will best support your own in your projects.

I hope you enjoy taking our quiz and quibbling with the results. Remember that with this and any other, say, Sorting Hat Quiz, you get the final say on where you belong. ;)

You can take the quiz here!

And/or explore all of the archetypes below…

If you don’t start a movement, who will? You are an initiator and a natural organiser.

Hermione founded S.P.E.W., brought Dumbledore’s Army together, and was the only one who actually prepared for the horcrux hunt, saving the trios’ lives on multiple occasions.

Her projects are not perfect, but look at the improvements she implemented between years 4 and 5. S.P.E.W. is really all about Hermione – she spent a lot of time fighting for house elf rights before taking the time to hear from the elves themselves. Knowledge is power, and in addition to being well read, communication can take Hermione’s efforts another step further.

For the DA, is less concerned with receiving credit, instead appointing Harry as leader, allowing his charisma and experience to bring strength to her vision. The first meeting is a discussion, allowing for collaboration and the strengths of others to make her project as effective as possible, even outlasting her own membership. Finding talented people and letting them do their thing is one of the signs of a great leader.

Learn from Hermione’s growth in accepting help, and the consequences of overcommitment and exhaustion. Be sure to take time to rest, and be careful in considering which projects are worth your energy.

You’re loyal to the causes you care about, and with direction, you bring crucial support that brings others’ ideas to life.

Ron represents the importance of being a follower. While he often gets jealous of Harry or Hermione taking the spotlight, his assistance is crucial to the success of the trio’s causes.

While Ron is a great person to delegate to for causes he cares about, he is absolutely rubbish when he doesn’t believe in the cause. Take his prefect duties for example.

Like his chess piece at the end of year 1, sometimes Ron has to sacrifice his personal glory for the group to succeed. As challenging as it is to do the work that isn’t often credited, Ron’s willingness to overcome personal obstacles allows him to evolve into a better activist.

You’re a natural leader and people are drawn to follow you. You’re filled with passion about the causes you care about, face difficult conversations head on, and would love to single-handedly be the one to make an impact.

From calling out Draco’s blood prejudices to telling the truth about Voldemort despite negative backlash, Harry is never afraid of the consequences of sharing his beliefs.

As Hermione points out, Harry has a bit of a ‘saving people thing’, and his weakness lies in his reluctance to let others help him. Remember in year 1 he wanted to go through the trapdoor all by himself? Yeah that wouldn’t have worked.

Harry truly shines when he collaborates with his friends and brings their strengths together. He makes a stellar leader and instructor, and sharing his skills and ideas with others proves essential to winning the war.

You’re busy, creative, and super ambitious. You have no interest in meeting with authority figures or writing policies – your skills are better suited for more visible kinds of activism.

Whether it’s creating diversions (fireworks and swamps, ahem), starting a secret radio show, or volunteering for The Order, Fred and George know how to jump behind a cause and add their unique flair and creativity.

Don’t let Molly’s idea of traditional success get you down – use your commanding presence as a superpower.

You have an acute sense what needs to be done to bring more love into the world, and you’re determined to do it.

Albus’s journey with activism is long and difficult one. The wise old wizard has learned from his years of experience, sometimes the hard way. The Dumbledore we meet is calm and understanding even under duress, and his strength lies in his devotion to his core values: trust and love.

He has learned that seeking power, even for the right reasons, can be dangerous. The older and wiser Dumbledore understands the value of collaboration. His plans thrive when he empowers those around him to discover their strengths.

Like Dumbledore, learn to question over-simplifications such as “for the greater good”, and strive to be well-read, constantly informed, and surrounded by trusted friends and allies.

You’re here for the long game. You’re not concerned with getting credit for big acts of heroism, but you are willing to put everything on the line for causes that you’re passionate about.

While Dumbledore credits Severus with Gryffindor-esque bravery for his covert missions, Severus is a true Slytherin, motivated by the people who matter to him most. Although he gets swept up by power as a teen, the weight of his actions in the Dark Arts are felt by him when those he cares about are personally affected.

Severus uses his unique perspective as a former Death Eater to the Order’s advantage. Dumbledore, haunted by his past, stays as far away from past temptations as he can, but Severus’s mental strength combined with his intelligence and determination prove essential to defeating Voldemort.

Maybe he could have generally been nicer though. We know you’d never threaten to poison Trevor, right?

You understand the importance of taking care of yourself, your family, and your community in the midst of great change.

Learn from Molly Weasley that a cup of tea and a warm meal can go a long way. Having a safe space for rest is just as valuable as being on the front lines of battle.

Molly literally guides Harry through Platform Nine and Three-Quarters, and gives him and many others a space to call home in The Burrow. She may have the dueling skills, but resorts to them only when absolutely needed.

Sometimes Molly can be judgemental and overprotective about her children, worrying about Fred and George’s poor performance in school, and resisting to Bill’s relationship with Fleur without putting in effort to get to know her. She has her children’s best interests at heart, and could put a little more trust in them to make their own choices.

You are not here for the glory, and maybe you aren’t so into being called an activist.

Aberforth does not find activism empowering or personally fulfilling; he is merely pissed off at how things are going in the world, and feels obligated to do something about it. He would much rather be caring for his sister than pursuing traditional heroics, but is always there when needed.

Understandably skeptical of social campaigns, Aberforth is a questioner who needs more convincing than most before taking action. He keeps his allies in check, reminding everyone to take time and consideration before jumping to conclusions about what really is ‘for the greater good’.

He may seem surly and indifferent, but don’t forget that he was a member of both iterations of the Order of the Phoenix. He proves himself beyond capable, diverting the Death Eaters’ attention away from Harry’s patronus and providing safe passage into the Room of Requirement through his pub. He may not enjoy keeping an (electric blue) eye on you, but will be there nonetheless.

While Albus makes great strides to correct his wrongs and not let them detract from the present, Aberforth can get a bit stuck in the past, letting bitterness in the way of personal progress.

You are not afraid to stand up for your beliefs – to your enemies or your friends. People may underestimate the value of your understated courage, but you strive for change constantly in daily interactions.

While Neville may be remembered for bold actions like restarting Dumbledore’s Army and defeating Nagini with the Sword of Gryffindor, his most courageous acts are in his steadfast dedication to his views.

As a wee first year, Neville earns the critical 10 points to Gryffindor for standing up to his friends. Neville is a loyal follower, but does not shy away from confronting his pals when their actions may not be wise. In Year 7, he stands up to the Carrows, refusing to perform the Cruciatus Curse on students.

Neville faces critique from authority, from his overbearing Gran to Professor Snape. Finding nurturing mentors like Lupin and Sprout, and encouraging friends like Hermione and Luna, remind him of the value of your your courage, abilities, and impact.

You’re not afraid to be yourself no matter what others may think, and you don’t miss a chance to speak up for the things you truly believe in.

Luna is curious, resourceful, and full of knowledge, informing others about Thestrals, and providing access to The Quibbler and the Ravenclaw Common Room. Her Ravenclaw qualities are a valuable asset to a Gryffindor-heavy team.

She exemplifies an enviable level of calm in the face of fear, and isn’t afraid to voice an unpopular opinion, but benefits greatly from others’ guidance and reminder of the greater picture.

Luna’s eccentricity is endearing to those around her, but can be alienating to the general public. Rather than being a figurehead herself, Luna makes a great advisor, providing support to spokespeople like Harry to communicate and implement her knowledge.

P.S. This March 2019, I’ll be presenting at the Granger Leadership Academy in Philadelphia. It’s my annual activist check-in, and always a transformative experience. I hope to see you there!

P.P.S. Leave a comment and let us know which character you got!

We were on a walk through the grounds of Armadale Castle when we realised our mutual love of the Baby-Sitters Club. We were already pretty close. AC and I were on a trip to the Isle of Skye, just the two of us. We were doing a master’s degree in theatre together in Edinburgh. She […]

Author’s Questionnaire 002 / LOLA KEELEY In this series, I feature authors whose works feel particularly Heroine Training-esque, asking questions that I care about as a reader, beyond the back-of-the book blurb. This week, meet Lola Keeley, author of The Music and the Mirror. Let’s meet the author first. Who are you and where are […]